For many, New Year’s Eve is about fireworks and champagne.

And maybe for you, it’s about staying indoors with loved ones — or your cat — to watch an old movie. Ushering in the New Year, nice and warm and snug.

Sounds comfy. But that’s not what this list is about.

This list is about the unexpected places all over America that really know how to celebrate New Year’s. Because regardless of how you choose to mark the occasion, New Year’s Eve is about honoring the accomplishments of the past year, while preparing for what’s next.

Western cultures have have been celebrating New Year’s Day on January 1st since the time of the Romans. However, different people from around the world mark the start of the their new year on different days. For example, in some African cultures, New Year’s Day is September 11th. In some areas of East Asia, it’s June 10th.

These are just a few examples of the way people ring in the new year all over the world. Also common are concerts, sporting events like American football or hockey, family meals, charity events, and church services.

In America, we’ve all heard about the ball drop in New York’s Times Square. But there are lots of other great places in America to celebrate New Year’s. Unexpected places like Jackson Hole, Wyoming. Or Calistoga, California.

From skiing to concerts, these small, out of the way, American towns really do it up for New Year’s.

So maybe you live near one of these places. Or you’re just in search of something new to do this year.

Either way, we want to help make this a New Year’s to remember.

Here’s a toast to next year being even better than the last.

When compiling this list, RAVE Reviews triangulated similar lists from sites like Travel + Leisure, USA Today, and many others from all across the Internet.

In our list, we gave each town a Confetti Rating from 1-10.

Each town earned points on the following:

Now you’re up to speed. Read on for America’s 10 best New Year’s destinations. 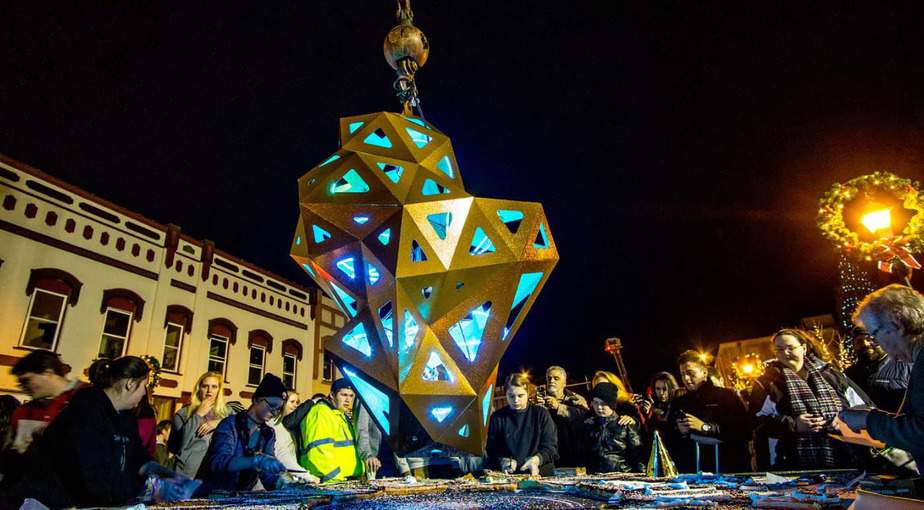 Where to Stay: Sign of the Dove Bed & Breakfast

The 80-pound gold nugget sculpture is slowly lowered into a giant donut. But wait, there’s more — you can eat the donut!

This quirky tradition has brought national attention to Marion. After all, where else can you eat a 10-foot, freshly baked donut with a gold nugget in the middle? And it’s all in honor of the state’s gold mining history.

New Year’s Eve in downtown Marion is a great destination for all ages. Festivities include a scavenger hunt, a costume contest, street dancing, the Resolution Run 5K, miniature train rides, and a sparkler display after the midnight gold nugget drop. Wagon and miniature trains are available for the kids.

Not only does Marion go all out for New Year’s, it adds its own unique twist with the “Gold Nugget Drop.” Definitely America’s Best New Year’s Destination. 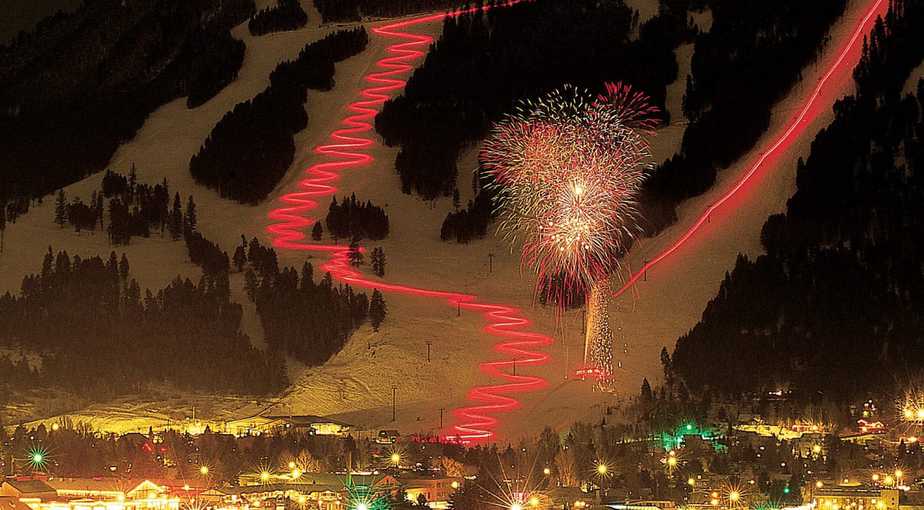 Where to Stay: The Lodge at Jackson Hole

But this town isn’t just for powder junkies. New Year’s in Jackson Hole also offers torchlight parades, fireworks, and plenty of live music. And for the kids, check out the Glow Worm Parade at nearby Jackson Hole Mountain Resort.

And in Jackson Hole itself, there’s plenty to do to ring in the New Year, from live music at The Mangy Moose, to partying at the Million Dollar Cowboy Bar.

If snowy pastimes are what you’re after, Jackson Hole is the perfect place to welcome the new year. 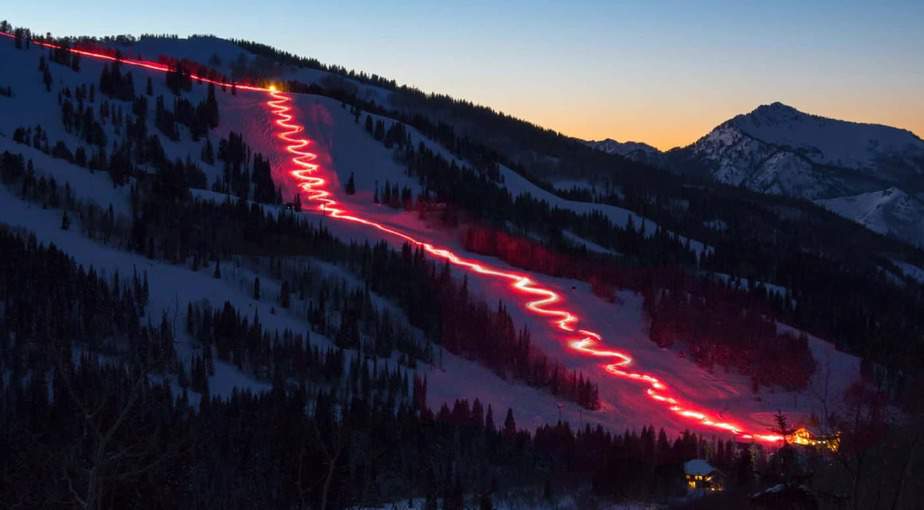 Where to Stay: The Ellerbeck Mansion

From music to fireworks and dancing, Salt Lake City knows how to party for New Year’s.

If you’re around Salt Lake for the holiday, we suggest checking out the NYE Torchlight Parade and Fireworks at Snowbird. Snowbird is about 30 miles outside Salt Lake, so make it an over-nighter!

In town, there’s the Masquerade Ball at Sheraton SLC, where you can enjoy a cocktail reception, dinner, and dancing. There’s also a balloon drop, door prizes, and a photo booth.

Up at Solitude Mountain Resort, don’t miss the Magic and Torchlight Parade. There’s also a magic show for children. And then, at 6 PM, see a synchronized team with torches ski down the mountain.

From snowy mountain scenery to big city fun, Salt Lake has it all for New Year’s. 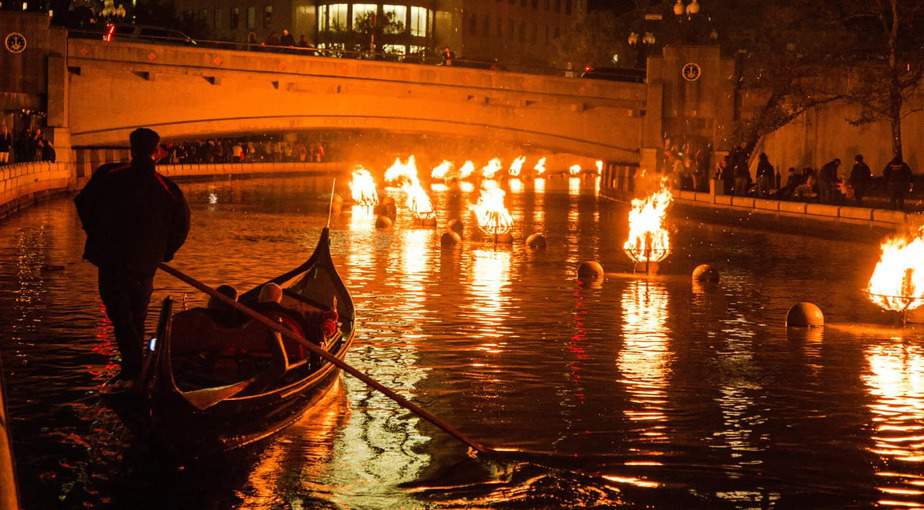 Where to Stay: Hotel Providence

With Boston, New York, Philadelphia, and D.C. nearby, it might surprise some that when it comes to New Year’s, Providence, RI gives these more well-known cities a run for their money.

First, experience a ball drop and fireworks display at the One Providence Ball Drop & Festivities. Or pick from 4 New Year’s Eve events at The Providence G. Choose from a Roaring 20s gala in The Ballroom, or play games and win prizes in GPub. You can also dance under the stars on the Rooftop, or enjoy a fancy 5-course dinner and live entertainment in Sarto.

If you’re headed to Providence, be sure to check out the great New Year’s packages available in town. For example, the Providence Marriott Downtown offers Light Up the New Year Bonfire Night. The event features a cocktail reception, a delicious meal, live music, and more.

All this makes Providence a great New Year’s destination.

This year, skip the big cities and try Providence instead.

Where to Stay: The Lodge at Santa Fe

Heading to the desert might not be your first thought when looking at places to spend New Year’s. But Santa Fe, NM has plenty of great (and warm) options for celebrating the holiday.

When in Santa Fe for New Year’s, head to New Year’s Eve on the Plaza. Expect live music, and food. And — as opposed to dropping a ball for New Year’s like a lot of other cities — Santa Fe raises theirs!

Other New Year’s options in Santa Fe include Glow, a family-friendly holiday lighting display at Santa Fe Botanical Gardens. There, you’ll find thousands of lights aglow throughout the Botanical Garden. You can enjoy music, delicious food and beverages by the fire, and a special laser light show.

Or try a Santa Fe New Year’s tradition at Vanessie Santa Fe. Have a delicious meal before moving into the world-class lounge and piano bar for a dessert buffet.

If dancing through the night with DJs and a light show sounds like your idea of a good time on New Year’s, Santa Fe has you covered there as well. There’s Meow Wolf: NYE Style, and New Year’s Eve at Skylight.

If classical music is more your thing, take in the annual New Year’s Eve Concert at The Lensic Performing Arts Center.

Head to the desert for a New Year’s Eve unlike anywhere else in the country. 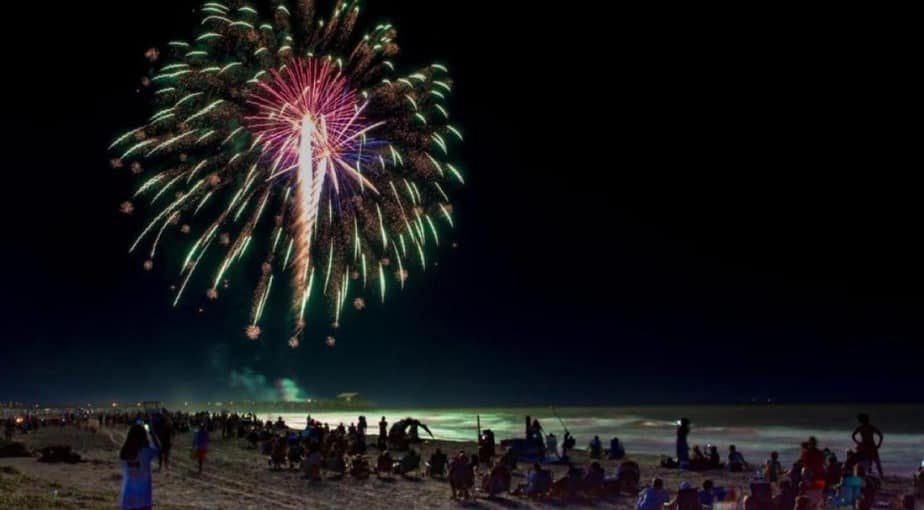 Where to Stay: Hotel Tybee

Tybee Island is known as “Savannah’s Beach.” If you’re ready for a dose of warmth and sun by the time December 31st rolls around, Tybee Island is a perfect choice.

First, there’s the New Year’s Eve Fireworks on Tybee Island, the largest New Year’s Eve fireworks show in the Southeastern US. See the show from from any of Tybee’s eastern beaches.

Back in Savannah, there’s plenty to do. For instance, there’s Up the Cup Countdown. Just before midnight, join in the countdown as Savannah’s six-foot tall cup up ascends it’s pole. Then, hang around for fireworks over the river.

You can also enjoy New Year’s Eve at Savannah City Market. While there, eat at any number of the market’s fine restaurants while listening to live music and enjoying the market’s lovely ambiance.

Tybee Island, and the greater Savannah area, is one of America’s most underrated places to spend New Year’s. 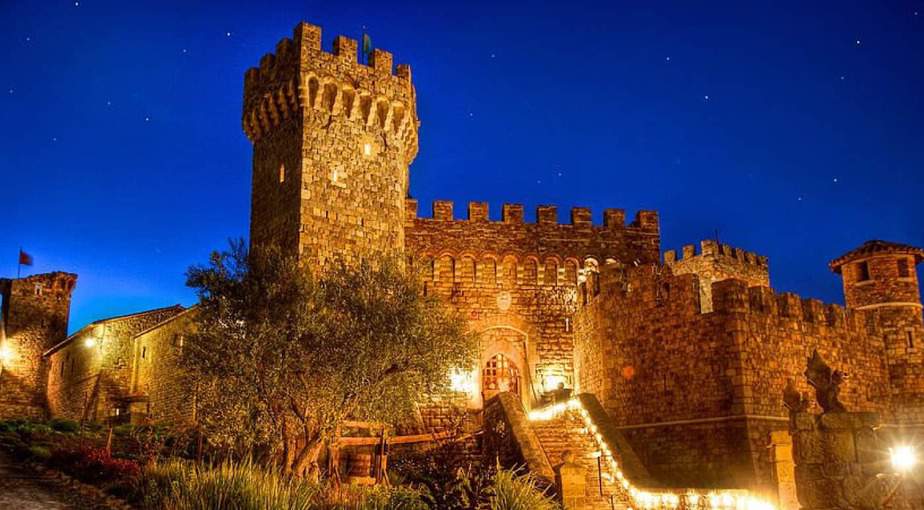 Where to Stay: Indian Springs Calistoga

If you’re in Napa Valley for New Year’s, head to Calistoga, CA. Don’t miss the New Year’s Eve Bash at Veraison, a French-inspired, farm-to-table bistro. There, you can eat a delicious meal, followed by bubbles, dessert, and a ball drop.

While in Calistoga, also be sure to check out Castello di Amorosa’s New Year’s Eve Casino Royale. Play games of chance like an international super spy while sipping sweet wine and enjoying dessert from the La Fantasia Lounge. You can then dance the night away on 2 dance floors, and toast the new year with a glass of Spumante at midnight.

Another option at Castello di Amorosa is the New Year’s Eve Masquerade Ball. Wear black tie and Venetian masks while enjoying a wine reception in the tasting room. Then enjoy a 5-course dinner, sparkling wine, and so much more.

All these things help make Calistoga, as well as the greater Napa Valley area in general, a great place to ring in the New Year.

If you feel that New Year’s Eve wouldn’t be complete without some excellent Napa Valley Wine, head to Calistoga. 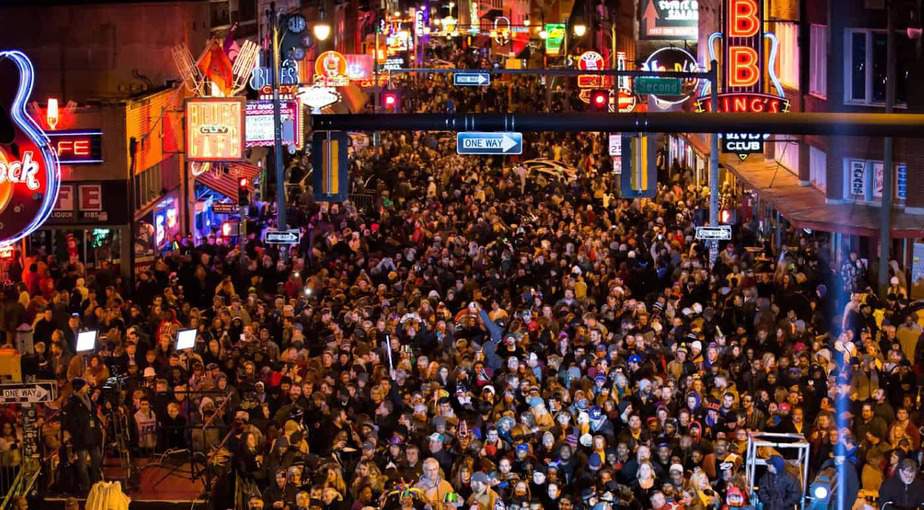 Where to Stay: The Peabody Memphis

Downtown Memphis is the place to be on New Year’s Eve. Beale Street, to be exact.

Memphis is a music town, so it only makes sense their New Year’s celebration would feature plenty of world-class live music. The list of artists who’ve performed during the Memphis New Year’s party includes B.B. King’s Blues Band featuring Tito Jackson, Bobby Rush, and many more. The Beale Street party also features a countdown to midnight, and a firework display. And it’s totally free!

Other NYE throwdowns in Memphis include the Hard Rock Cafe’s “Hard Rock Guitar Drop.” Rock out to live music and then, at the stroke of midnight, watch as a 10-foot D’Angelico Guitar is dropped from the sky.

While in Memphis, you can also enjoy dinner, live music, and dancing all night long at B.B. King’s Blues Club. Or instead, party at the Tin Roof, where you can dance the night away to live music and DJs.

As if all that’s not enough, Memphis offers a long list of other live music and dancing opportunities, perfect for ringing in the New Year.

If you’re a music fan, book your ticket to Memphis for New Year’s. 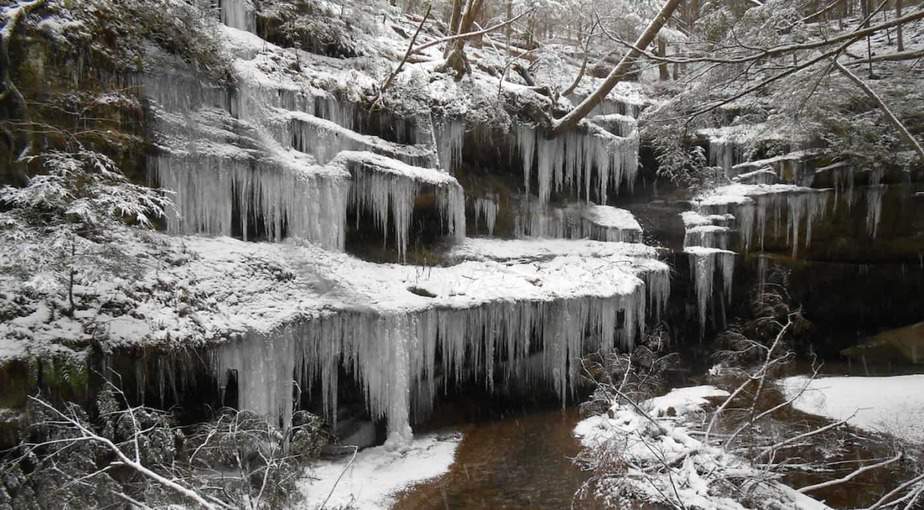 Where to Stay: Hocking Hills Inn and Coffee Emporium

Make your holiday unforgettable with winter hiking, brewery visits, spa treatments, and much more. Rekindle the romance with your sweetheart at the Inn & Spa at Cedar Falls. Enjoy a stress-free stay with Cedar Falls New Year’s Eve Special.

Or take a ride on the Hocking Valley Scenic Railway. Enjoy wine and cheese instead while taking the scenic route through town. And at midnight, marvel at a spectacular fireworks display.

Another NYE options in Hocking Hills is the family-friendly New Year’s Eve Gala at the Dairy Barn Arts Center.

And on New Year’s Day, try a hike through Hocking Hills State Park.

Mix nature and beautiful scenery into your New Year’s celebration in Hocking Hills. 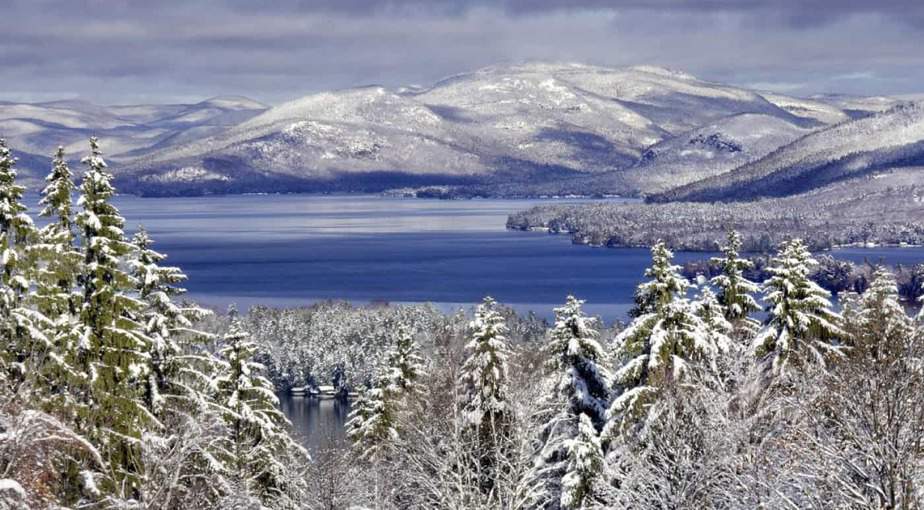 Where to Stay: Boathouse Bed & Breakfast

In Lake George, there are lots of ways to ring in the new year. First up, try any number of the wonderful cruises around the lake.

Notably, there’s the New Year’s Eve Dinner Cruise, put on by the Lake George Steamboat Company. Or for some grownup fun, go for the New Year’s Eve Party Cruise. Enjoy a full buffet, live music, and a champagne countdown, all included with your ticket.

There are also tons of live music options in the Lake George area, from the New Year’s Day Party at Lake George Beach Club, to the New Year’s Eve Party at King Neptune’s. Whichever party or cruise you choose, you can expect dancing, delicious food, and, of course, a champagne toast at midnight.

And if you’re brave enough, try the New Year’s Day Polar Bear Plunge into Lake George. Each year, hundreds plunge into frigid Lake George while spectators cheer them on.

Check a Polar Bear plunge off your bucket list in Lake George, NY.

Posts by The RAVE Editors