For many, summertime means lazy days by the riverside and backyard barbecues.

But not us. Okay, we love those things too. That is, when the warm weather isn’t reminding us college football is fast approaching.

We crave the roar of the crowd, dressed in their fresh jerseys, as the band plays the alma mater fight song. But, really, we love it all: the tailgating, the face paint, the obsessive checking and rechecking of where our teams are ranked in the polls.

However, what we love more than anything is the town–some we still live in, some we only return to for the games, and some we wonder why we ever left in the first place.

In this ranking, RAVE Reviews wanted to pay tribute to not only the best college football destinations, but also the towns that best balanced a great lifestyle with great college football–the best places to both raise a family and root for your team together.

This ranking made us football fans even more excited about the autumn leaves turning to warmer colors as the cool air returns. Did your town make the list? Keep reading to find out.

How did college football start?

Before we get to America’s 10 best college football destinations, let’s first take a look at how college and football became so interconnected.

November 6, 1869–this date should be like a holiday for serious fans of college football. It was on this day that Rutgers and Princeton played what is widely considered the first ever college football game. For those who may need a reminder, Rutgers beat Princeton by a score of 6 to 4.

Rutgers University is considered the birthplace of college football, but It wasn’t until the 1880s, that a rugby player from Yale named Walter Camp pioneered rule changes that would slowly transforming rugby into the game known today as American Football.

How did President Teddy Roosevelt save college football?

Without Teddy Roosevelt, the game of football might not exist today. In the early 20th century, football was an even more dangerous sport.

In 1904, The Chicago Tribune reported over 150 serious football-related injuries and 18 deaths.

One of the problems was that the forward pass was an illegal play at the time. So, the only way to advance the ball was to lock arms and turn heads, necks, and bodies into brutal battering rams.

Common football injuries included broken spines and fractured ribs that punctured hearts–that’s not the kind of Sportscenter highlight any of us look forward to seeing.

A football fan himself, and the father of Theodore Jr. who was playing football at Harvard at the time, Teddy Roosevelt didn’t want his son to be injured or even killed, so Rosevelt summoned head coaches and representatives from the big football powers of the era: Harvard, Yale, and Princeton.

The schools pledged to do what they could to help clean up the game.

It took some time, but by 1906 radical rule changes were adopted by the intercollegiate conference, now known as the NCAA.

These and further rule changes improved the safety of football and, in the process, helped create the modern game we know today.

How well do you know your football?

Who is the best college football team of all time?

Perhaps the most important bit of trivia of all–who is the best college team of all time? Opinions will differ of course, and isn’t that the great thing about sports, anyway?

But here are 5 teams widely considered to be among the greatest teams in all of college football history. Also included is the year in which they fielded their greatest group of players (as ranked by ESPN.com).

There’s good reason why the Nebraska Cornhuskers are one of college football’s most storied programs. In 1995, the Huskers won their second straight national championship, with a 62-24 trouncing of Florida in the Fiesta Bowl.

After beating the Nazis, the Army went on to win the national title, beating Navy 32-13 in the annual Philadelphia classic.

In 2001, the Miami Hurricanes went 12-0, beating their opponents by an average margin of 34 points.

The only thing left to do now is take a look at the list you’ve been waiting for–America’s 10 best college football destinations.

When compiling this ranking, RAVE Reviews looked at the 20 most winning teams in the history of college football. We then triangulated rankings of America’s best college towns from all across the internet.

Each team started with a base score of 81-100. The most winning team earned a 100, and so on. The team then scored a first down (so to speak) every time the town in which the university is located showed up on lists of America’s best college towns.

If the town, or university, ranked in all-time most winning college football teams, but didn’t show up on any best college town rankings, it was excluded from our ranking.

We evaluated each destination on the following:

We feel this methodology produced a comprehensive top 10. Do you agree? Let’s play ball. 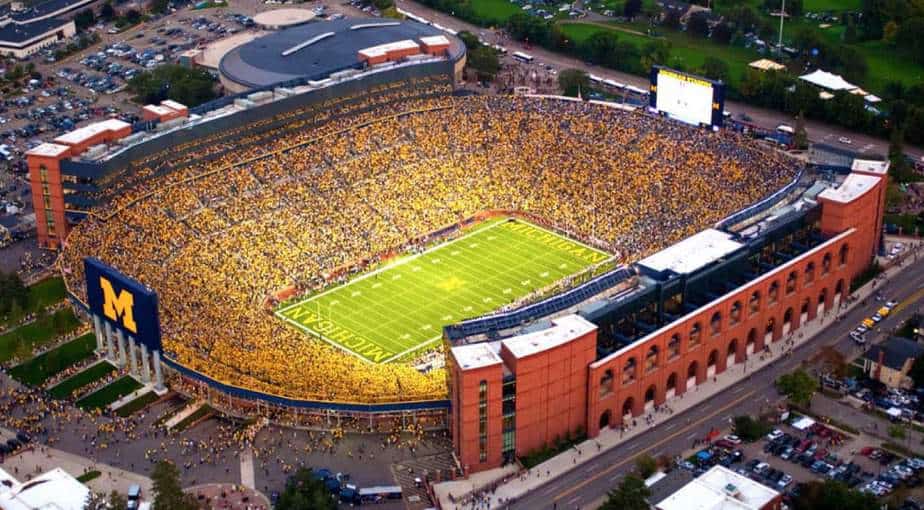 Where to stay: Graduate Ann Arbor

Where to eat: Taste Kitchen

What we liked about Ann Arbor (besides what happens on the gridiron) is everything else the town has to offer, with plenty to do both indoors and outdoors.

It’s cold there in the winter, but nevertheless there’s plenty to do outdoors in Ann Arbor, from biking the paths to hiking the trails.

Most of all, the best college towns are both lively and livable. Luckily, Ann Arbor is both. This, coupled with the great football action provided by the Michigan Wolverines, makes Ann Arbor without a doubt America’s best college football destination. 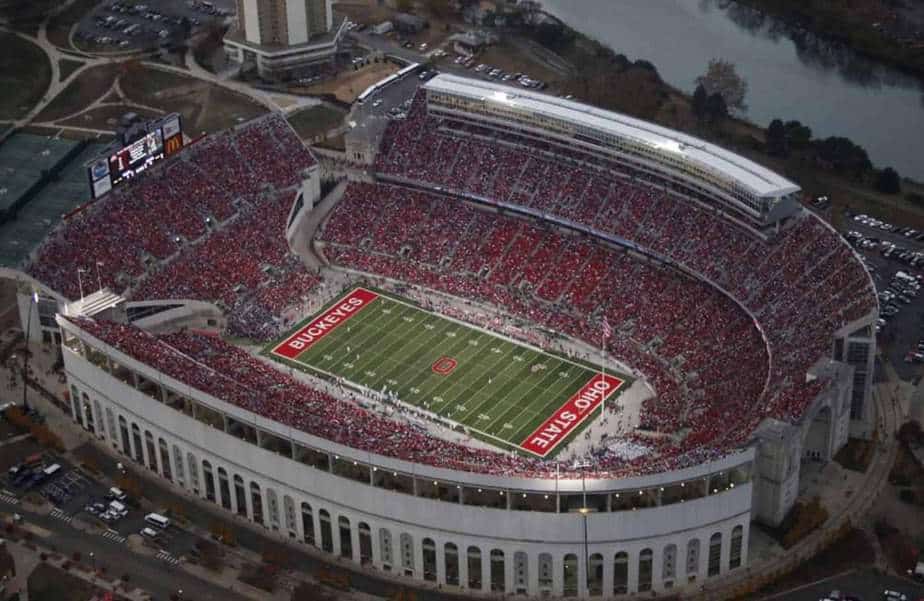 Where to stay: The Blackwell Inn and Pfahl Conference Center

Where to eat: Refectory Restaurant

But when the Buckeyes play, with an all-time record of 911 and 324–the second best all time–the whole city seems to come out to support their team.

On top of all that, there’s plenty to do in Columbus besides take in some football. OSU’s university district is like a city unto itself.

While in Columbus, be sure to check out Mirror Lake, or maybe the view of the Oval from atop the Thompson library. Or instead, visit the Wexner Center for the Arts. 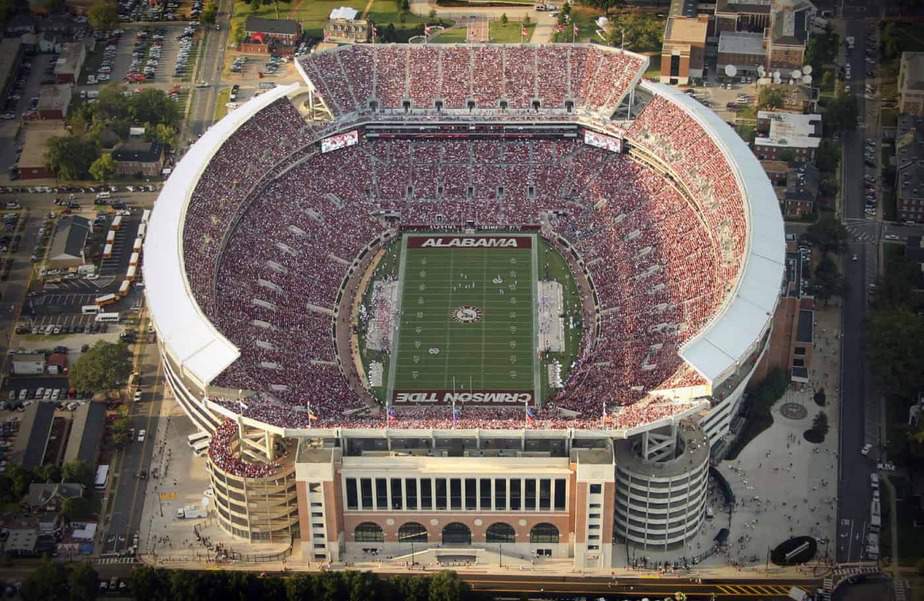 Where to stay: Hotel Indigo

Where to eat: The Avenue Pub

Despite having the fourth best winning record all-time at 905 and 329, these days the Alabama Crimson Tide are practically synonymous with college football.

But there’s a lot more to do in Tuscaloosa than just watch football–though really, isn’t that enough?

First off, Tuscaloosa is home to Houndstooth, the nation’s best sports bar according to Playboy Magazine–and they’d know.

Or, get yourself steeped in football history at the Paul W. Bryant Museum. Stroll through the Tuscaloosa Riverwalk, or take in the last of the season’s fresh vegetables at the Tuscaloosa Farmer’s Market. 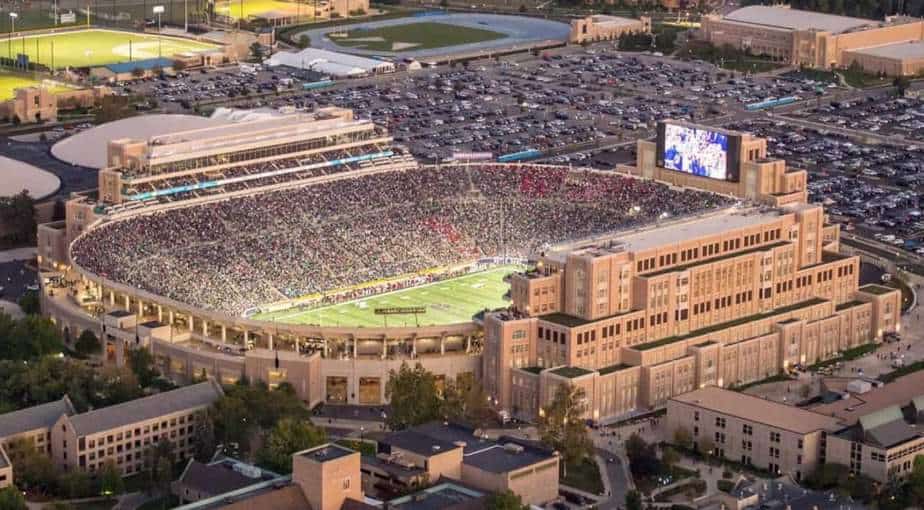 Where to stay: Aloft South Bend

Where to Eat: Cafe Navarre

Up next in our ranking of the 10 best college football destinations is South Bend, Indiana.

With the sixth best winning record all time, at 905 and 329, Notre Dame football is a legendary program. Great players to pass through the halls of Notre Dame include Joe Montana and Paul Hornung.

And there’s more to South Bend than the Fighting Irish and Mayor Pete Buttigieg. While in South Bend, check out the Basilica of the Sacred Heart, Studebaker National Museum, or Potawatomi Zoo.

You could also take in a show (off the gridiron) at the Morris Performing Arts Center. 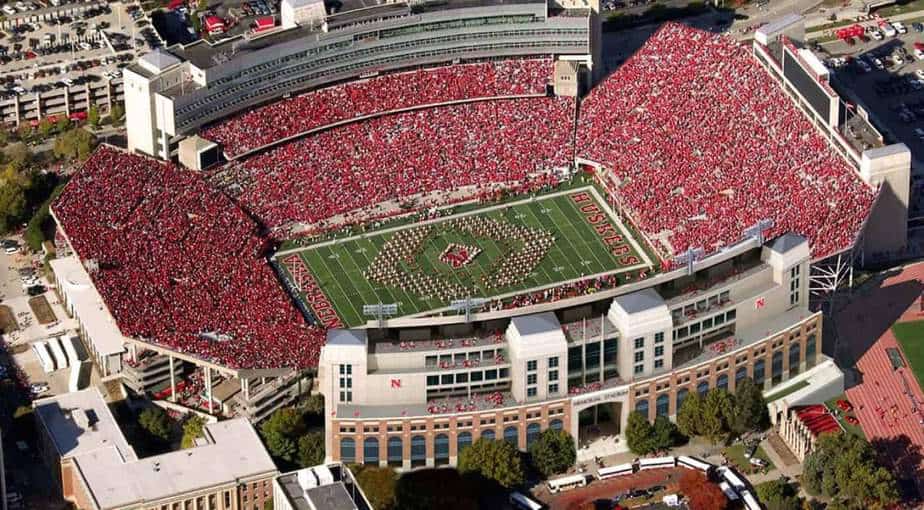 Where to eat: Hopcat – Lincoln

With an all-time win record of 897 and 388, Cornhusker fans are some of the most faithful in all of college football, and perhaps in all of sports. The team’s been a bit down lately, but hope springs eternal.

And Lincoln is also a great place to visit when you aren’t watching Huskers football. While visiting America’s “Happiest and Healthiest City” according to Gallup-Healthways, be sure to visit the music venues, theaters, historic sites, museums, and parks.

Speaking of parks, Lincoln is home to more than 100 of them, and they’re all full of beautiful trails and gardens. 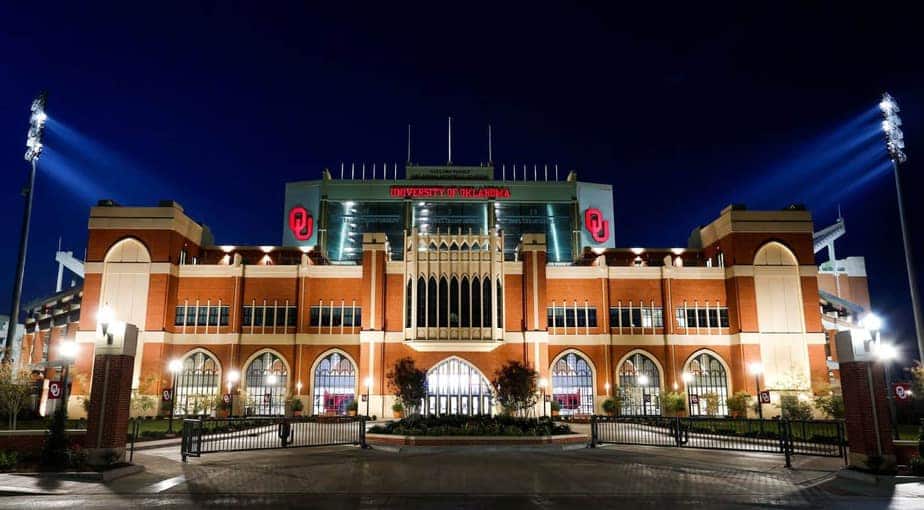 Where to stay: Whispering Pines Inn

Sixth place in our ranking goes to Norman, Oklahoma, where the Oklahoma Sooners take the field in crimson and cream.

The Sooners boast the eighth best winning record in the history of college football at 896 and 325.

In addition to football, Oklahoma’s third largest city has plenty of restaurants, parks and museums to explore.

The annual Chocolate Festival is another popular attraction in Norman, but a Sooners football game is without a doubt the hottest ticket in town with the Gaylord Family Oklahoma Memorial Stadium being one of the loudest venues in the sport. 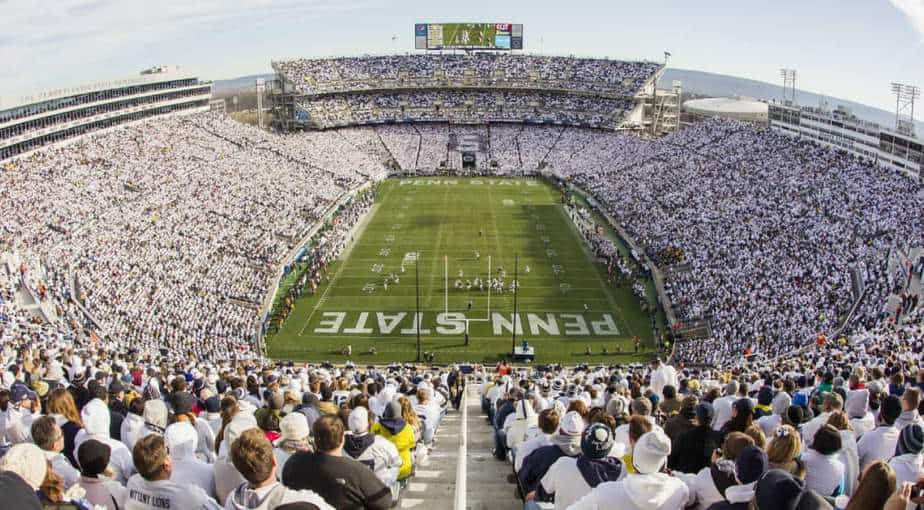 Where to stay: The Nittany Lion Inn

Where to eat: Faccia Luna Pizzeria

In addition to being considered one of America’s smartest towns, with one of the country’s best music scenes and a safe and comfortable lifestyle, State College, Pennsylvania is also home to the Penn State Nittany Lions.

And that’s what we’re here to talk about.

With an all-time win record of 887 and 391, ninth best in the history of college football, the Nittany Lions boast a loyal and passionate fanbase.

But while you’re in State College, be sure not to miss the thriving downtown near the university, as well as all the beautiful natural scenery the area has to offer. 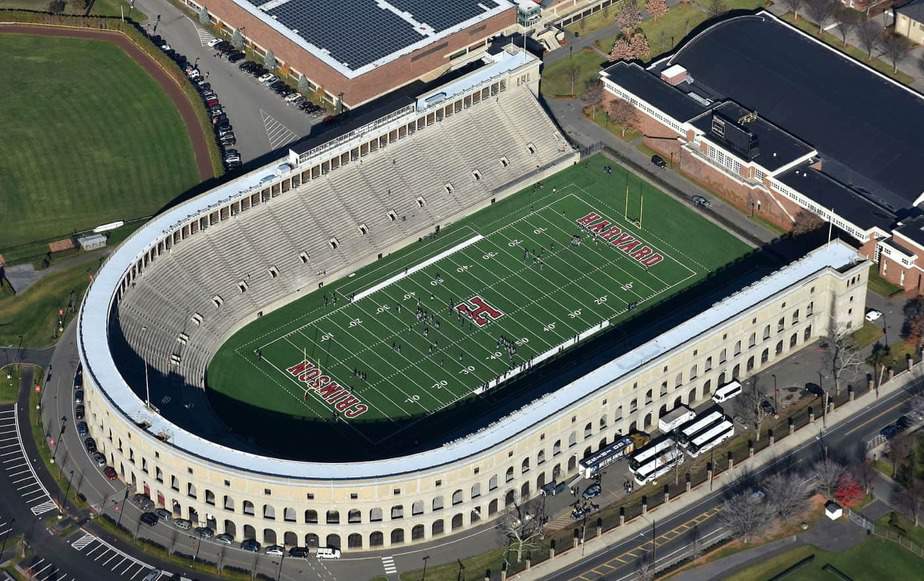 Where to stay: Harvard Square Hotel

Where to eat: Alden & Harlow

These days, Harvard isn’t often associated with football. But the fact of the matter is, there’s a long history of college football at this Ivy League school, and it’s something loyal Harvard Crimson fans are more than happy to talk about.

At 875 and 397, Harvard has the tenth best winning record in the history of the sport. It helps that the Harvard Crimson had their first field a team all the way back in the 1870s. So there’s lots of history here for football fans of all sorts and backgrounds to take in.

In addition to being a capital for academics and higher education (as well as football), Cambridge is also widely considered one of the nation’s most livable cities, with a vibrant arts and culture scene as well as  plenty of places to eat world-class food. 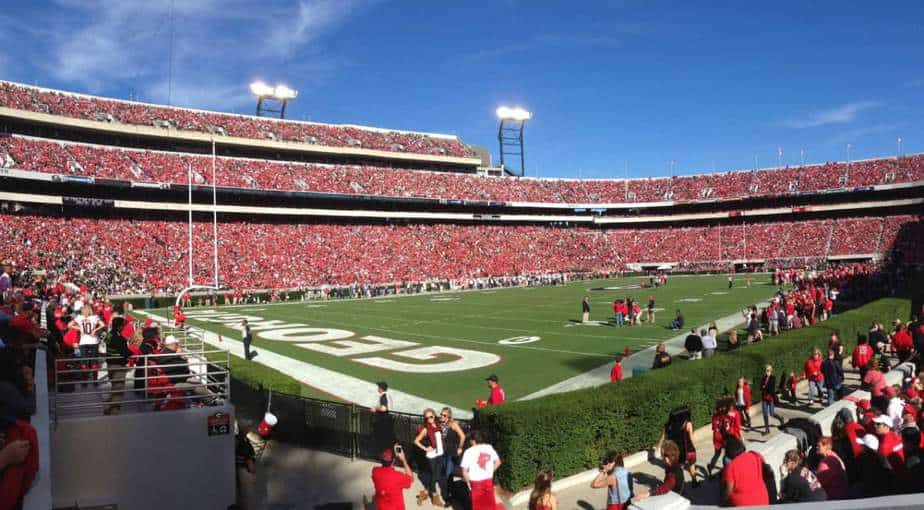 Where to stay: Hotel Indigo

Where to eat: White Tiger Gourmet

Ninth in our ranking of the 10 best college football destinations is Athens, Georgia, where the Georgia Bulldogs take the field.

With an all-time win record of 819 and 423, the Georgia Bulldogs lay claim to the fifteenth best winning record in the entire history of the sport, drawing fans from all over the Southern U.S. and beyond.

But from music (Athens is the birthplace of REM) to a vibrant nightlife,  Athens is also a great place to visit any time of the year, with great live music venues, restaurants, bars, and coffee shops. 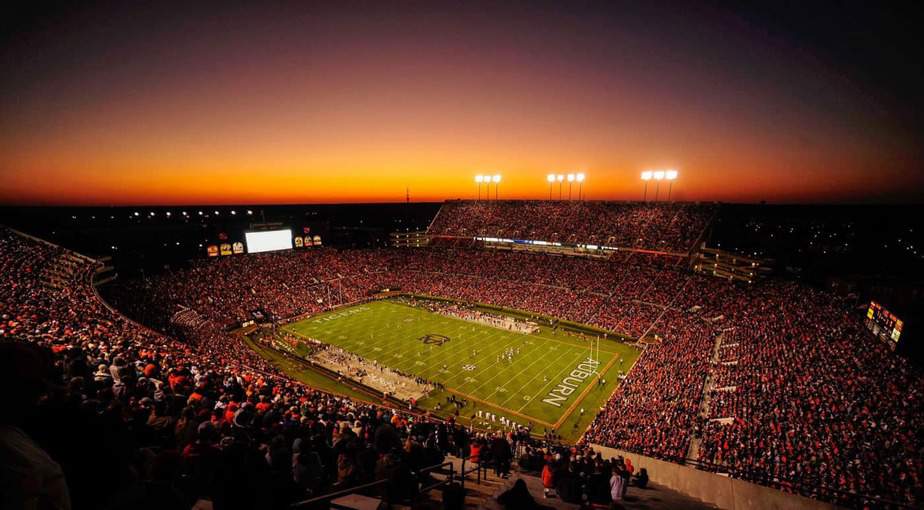 Where to stay: The Hotel at Auburn University

Where to eat: The Hound

Alabama is home to not one, but two great college football teams. The Auburn Tigers play at Auburn University, the state’s largest institution.

With the nineteenth best winning record in the history of college football at 767 and 441, the Tigers have been in the national championship twice recently, winning once.

In addition to football, Auburn has lots of art museums, theater venues, and even a famous film festival.

Other things to do in Auburn include the Jule Collins Smith Museum, and the Southeastern Raptor Center.

Posts by The RAVE Editors

The 50 Most Fun Colleges in America