No, this isn’t a script from the new Game of Thrones Season (unfortunately). I am referring to the birth of the carousel.

What we know today as the go-to attraction for over-enthusiastic, cotton candy stuffed kids was originally developed in the 12th century to be a high-intensity training exercise. The method behind the madness?  Horsemen would ride around in circles trying to wack their opponents with a perfume-infused ball. Weird, I know.

These iconic attractions offer something special that brings in people from all over the world, from all walks of life. Young and old alike. What is stopping mom and dad from hopping on and going for a nostalgic spin? Nothing! We aren’t going to judge.

Maybe it’s the spark of imagination when you get to choose which noble steed to ride into battle. Or which sea creature will take you on the next circular adventure. The mix of artistry and amusement also makes carousels a prime target for romantic evenings. Maybe one of these featured in our article is only a short drive away from you!

No two carousels are built alike. Wood, metal, stone. Fast and slow. You could argue that it is more art than a carnival ride, especially considering some were meticulously hand-carved.

Each carousel featured below has a unique story to tell. Some have seen the world. A few have been featured in classic and adored films while some have stories to tell that will never be heard. One or two have even been given awards!

The actual number of carousels still in operation today is unclear. Of the thousands created, only a handful still exist. Many carousels in America are starting to be classified as National Historic Landmarks, which will help preserve the ones remaining.

From horses to lobsters and planes to cars, here are the 23 Best Carousels we RAVE about!

The Best Carousels in America 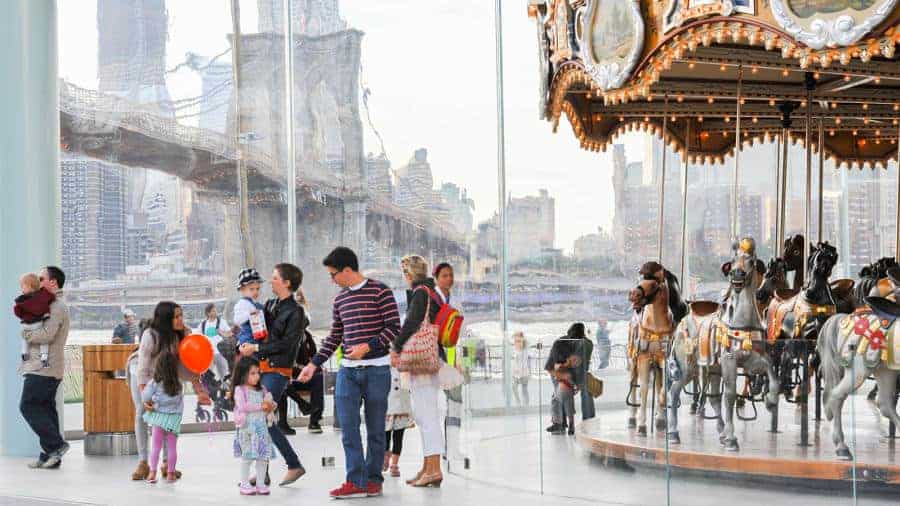 This beautiful carousel was designed by Pritzker-prize winning architect Jean Nouvel and constructed by the Philadelphia Toboggan Company nearly a century ago.

Originally built in Ohio, it was restored in 1984 and relocated to Brooklyn. It is now enclosed in glass for both preservation and to allow visitors rain-free rides. It was also rated “Best Public Space” by the 2012 Travel & Leisure Design Awards. 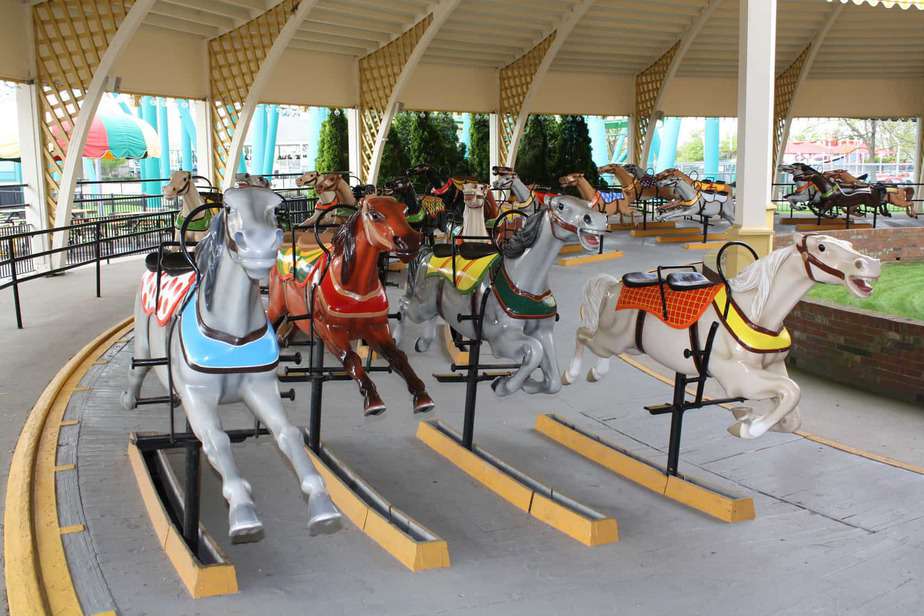 This distinctive carousel on the shore of Lake Erie near Cedar Point Amusement Park was built in 1920 and was moved to its current location in 1967. With 64 horses, it artfully mimics a horse race and reaches a maximum speed of 15 mph – fairly impressive in the carousel world.

A Carousel for Missoula • Missoula, Montana 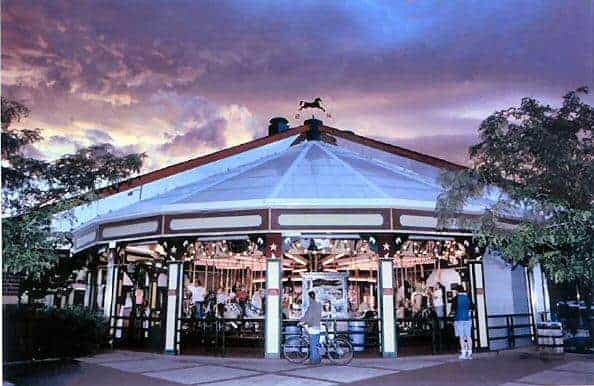 This gem of a carousel is located on the Clark Fork River and was constructed by Missoula cabinet-maker Chuck Kaparich. It has a maximum speed of 11 mph and all the horses were carefully handcrafted; some even have real hair. 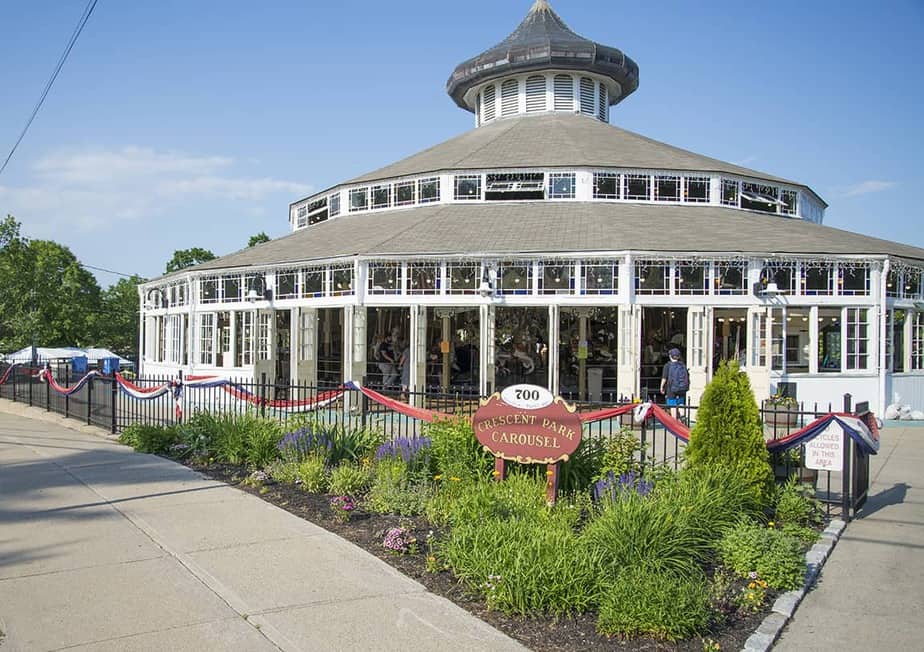 This huge carousel has graced Crescent Park since 1895 and is a result of the handiwork of legendary carousel builder Charles I. D. Looff. It has 61 horses and was restored in the 1970s. It is now featured in the National Register of Historic Sites and Places. 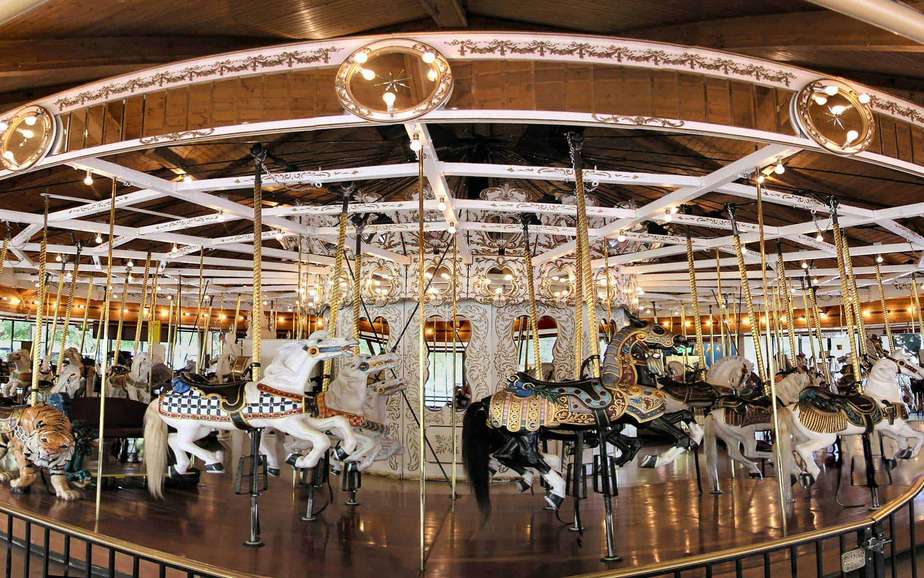 This stunning carousel was originally was built in 1909 as a gift for master carousel craftsman Charles Looff’s daughter on her wedding day. It features elaborate decorations, hand carved horses, a tiger, a giraffe and a ring to catch. 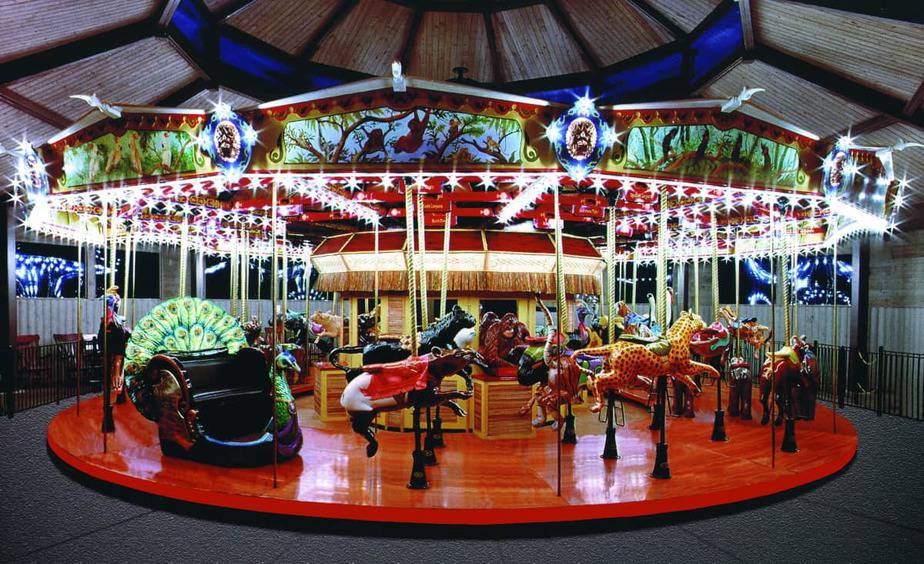 The first of its kind, this carousel depicts endangered species from Southeast Asia to help raise awareness and promote conservation. Built relatively recently in 1994, it’s a major attraction for the Fort Wayne Children’s Zoo that surrounds it.

This double-decker carousel was handcrafted in Italy and decorated with paintings of the San Francisco area including the Golden Gate Bridge, Coit Tower, Chinatown and Alcatraz island. Animals on this carousel include lions, panda bears, dolphins and more. 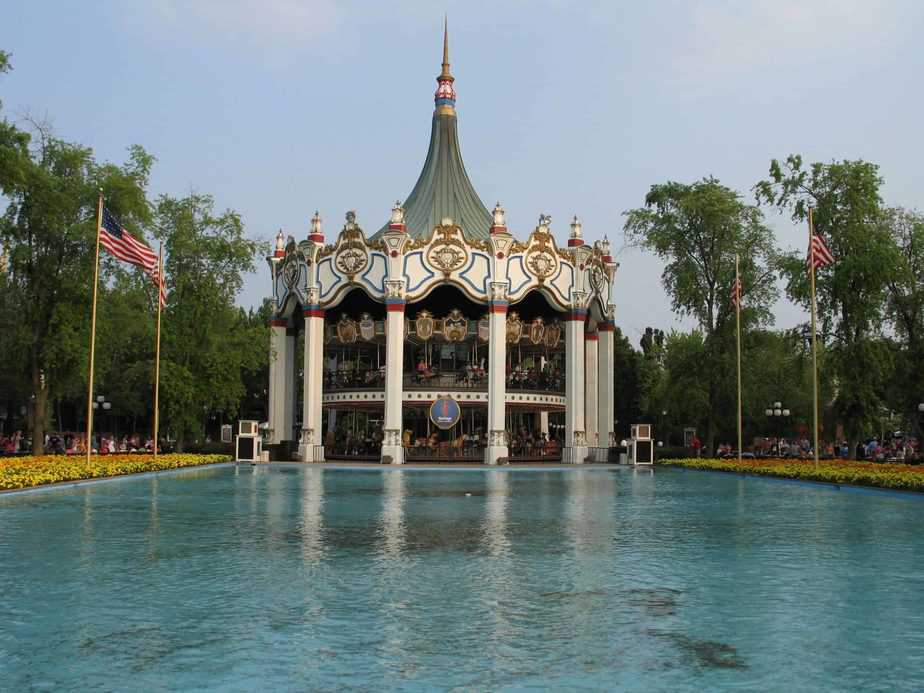 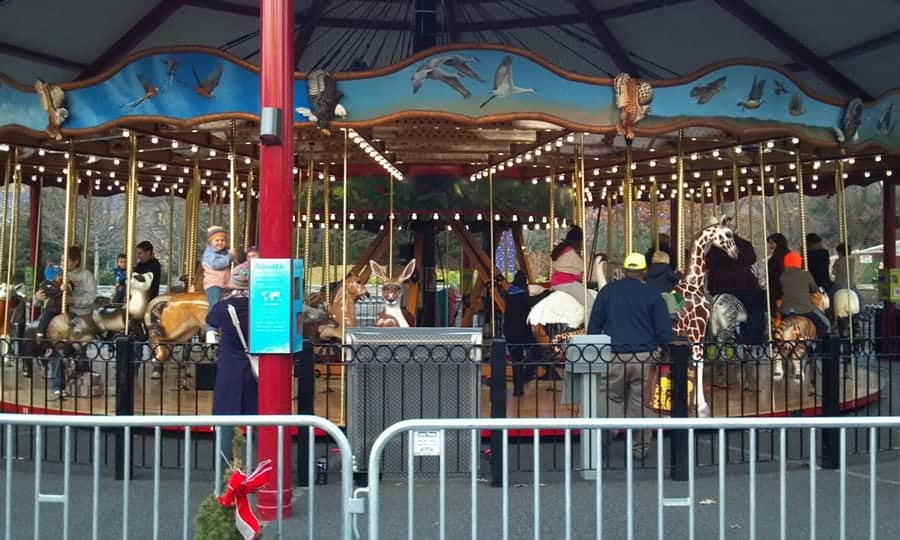 This historic carousel was built in 1947 by Allan Herschell. It’s located on the Washington D.C. mall just steps from where the 1963 Civil Rights March occurred and down the street from where Martin Luther King Jr. gave his “I have a dream” speech.

Originally located in Baltimore, this carousel became a civil rights movement symbol when an African American family rode it on the first day the park became desegregated. It was relocated to Washington D.C. in 1981. 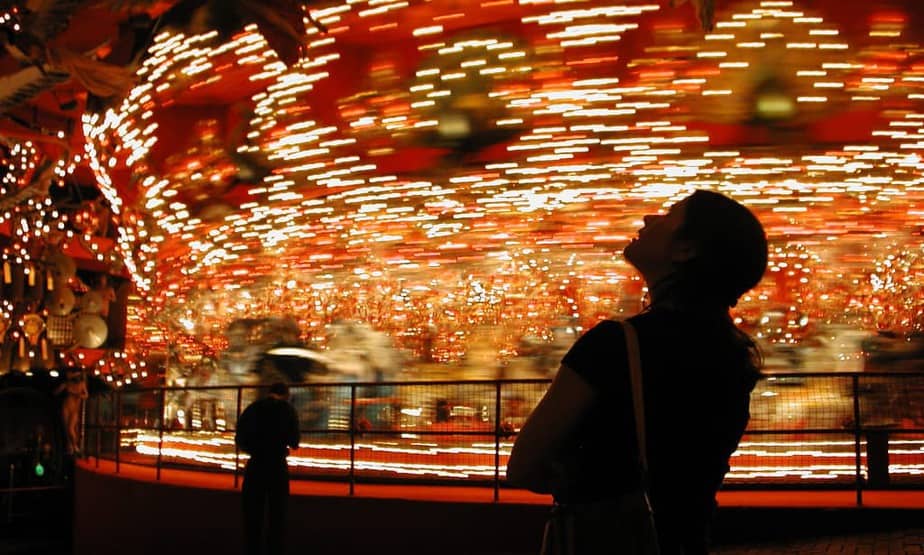 This majestic carousel features thousands of flashing lights, hundreds of angels suspended in air and lots of thrills. It is considered the world’s largest indoor carousel and is located inside of the House on the Rock in Spring Green, WI on top of Deer Shelter Rock, a sandstone formation located in the Wyoming Valley area. 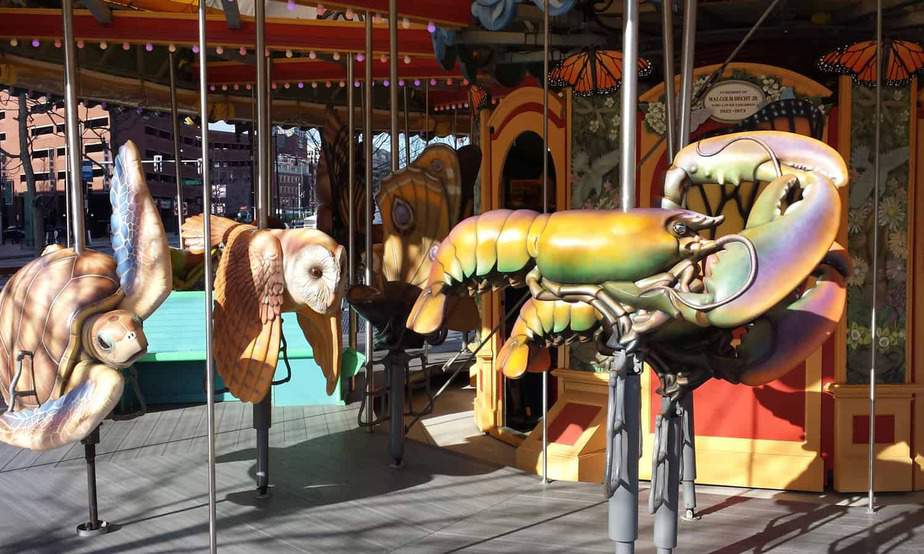 This relatively new carousel was built for the Boston Greenway project. Donor Amalie Kass funded it to provide entertainment for neighborhood children and features fanciful creatures local to the Boston area like a fox, squirrel, lobster, peregrine falcon and even a grasshopper. 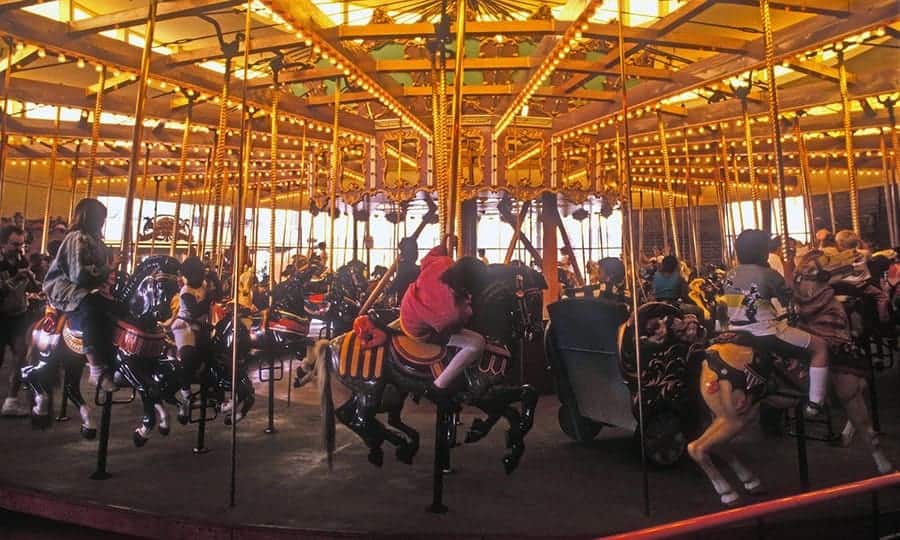 This 1911 carousel is a National Historic Landmark and has been in its original location for over 100 years. It features an outside row of jumping horses and a working ring dispenser. 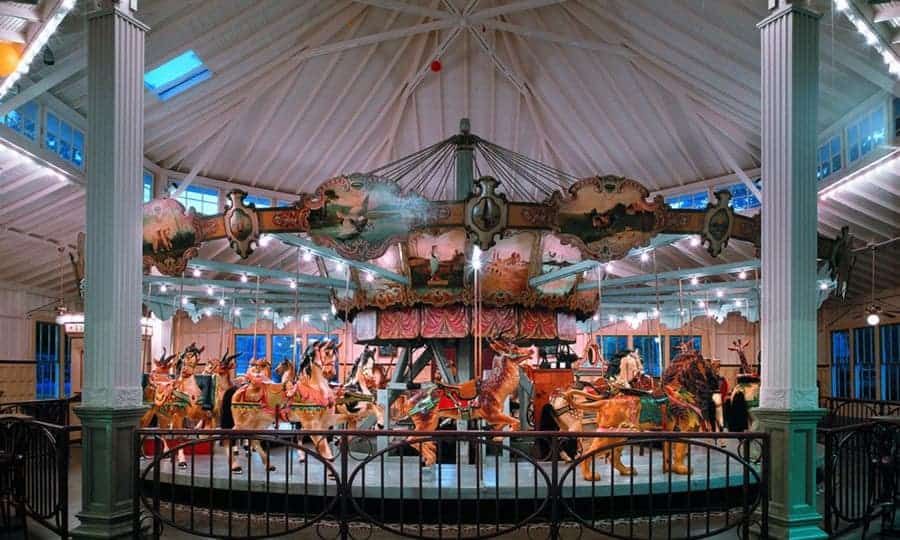 This double row carousel has been in operation since 1909 and is considered a National Historic Landmark. The animals were all hand carved from poplar and bass wood in Philadelphia by the artist Dentzel. 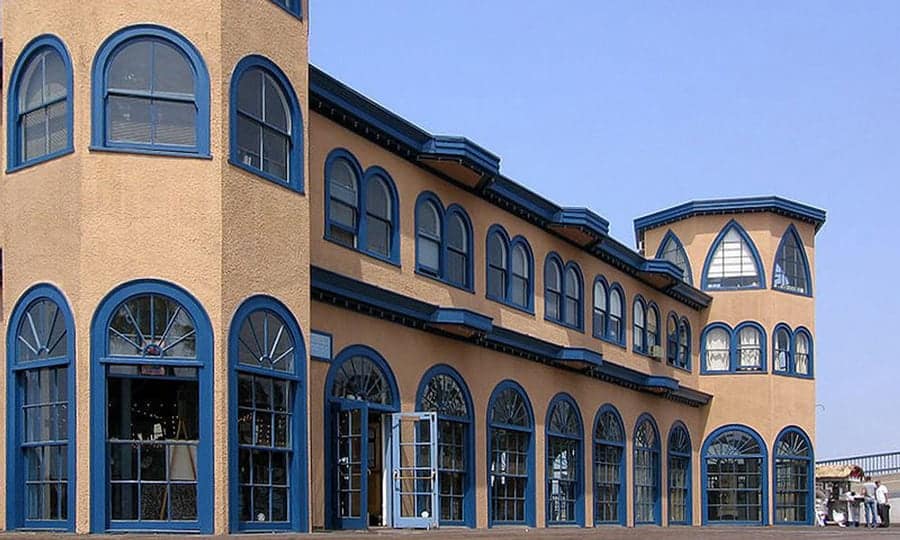 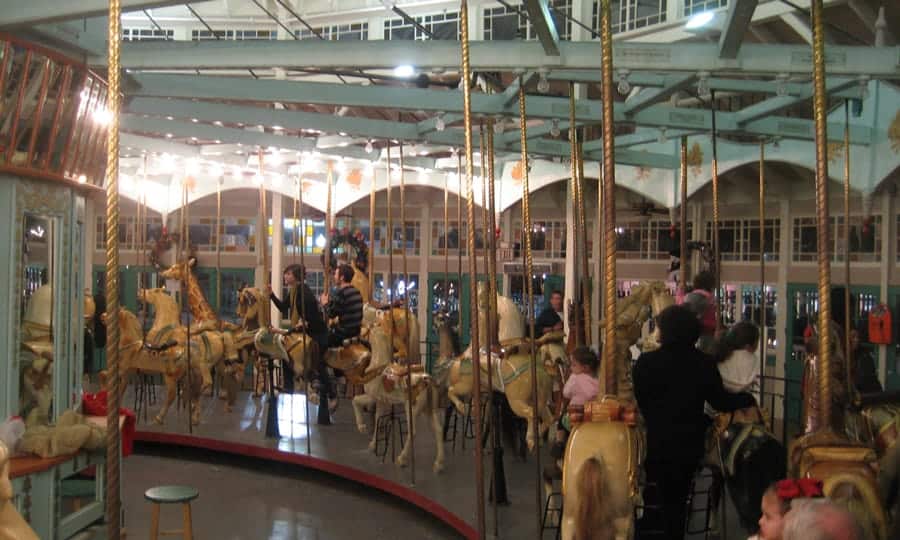 The “Flying Horses” carousel at New Orleans City Park is over a century old. The hand painted animals were hand carved by Looff, Carmel and Murphy. There are both stationary and moving animals including horses, a lion, a camel and a giraffe. 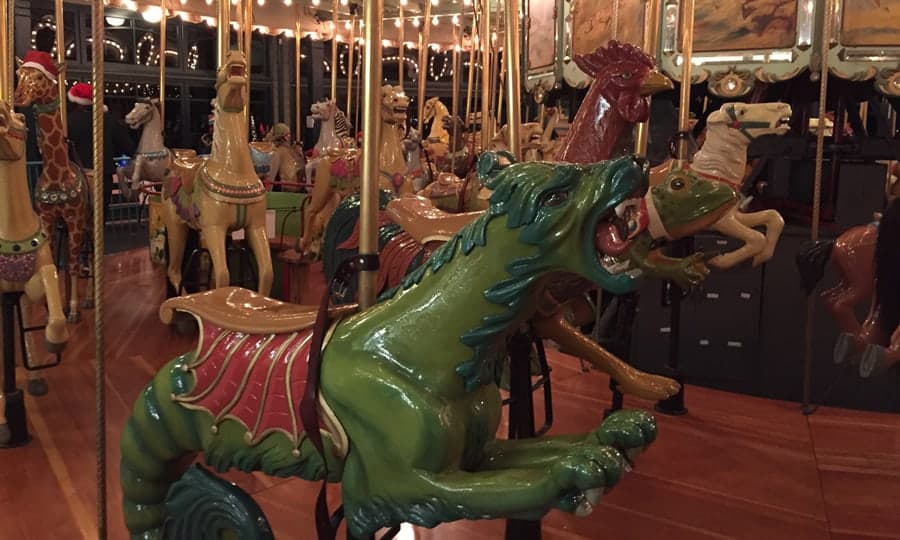 This merry go round features four rows of hand-carved giraffes, horses, chickens, dogs, cats, lions and more. It was built over 60 years ago and is still running strong. Its beautiful park location in Berkeley, California makes it an idyllic setting for a carousel ride any time of year. 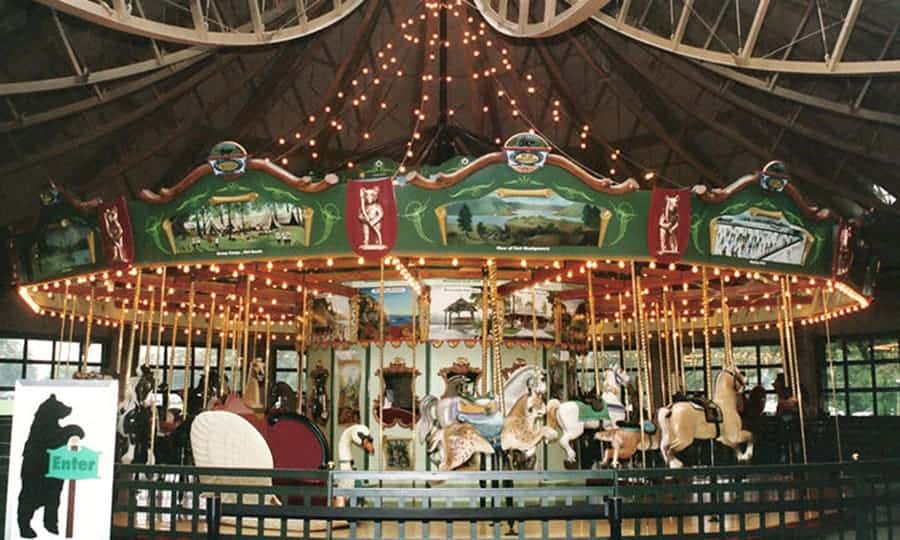 This special carousel features animals native to the Hudson River Valley including a red fox, rabbit, river otter, skunk and even a turkey. It’s located in a beautiful state park where you can also camp, swim, fish and enjoy the outdoors. 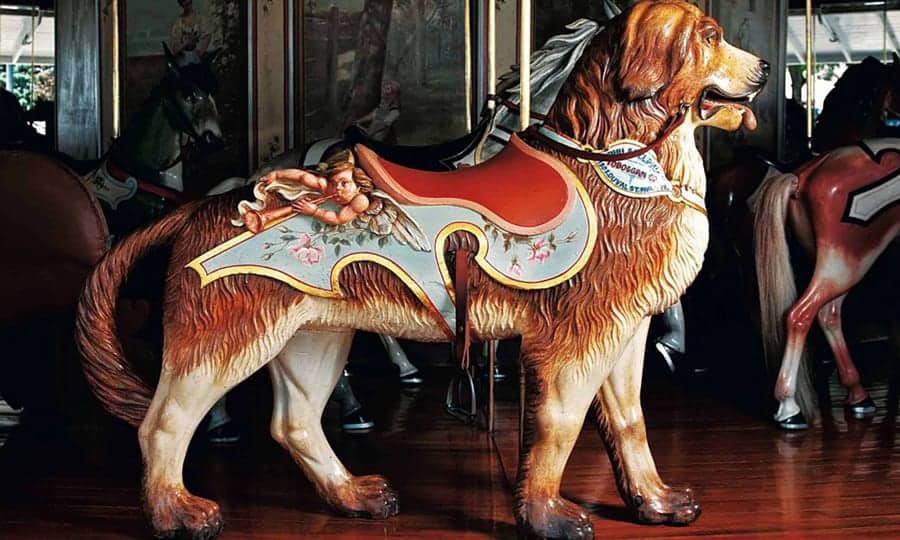 This inspiring merry go round was manufactured by the iconic Philadelphia Toboggan Company and now housed at the county fairgrounds in Burlington, Colorado. It features three rows of animals in a 12-sided building. The menagerie of animals features horses, goats, zebras, burros, camels and adorable goats. 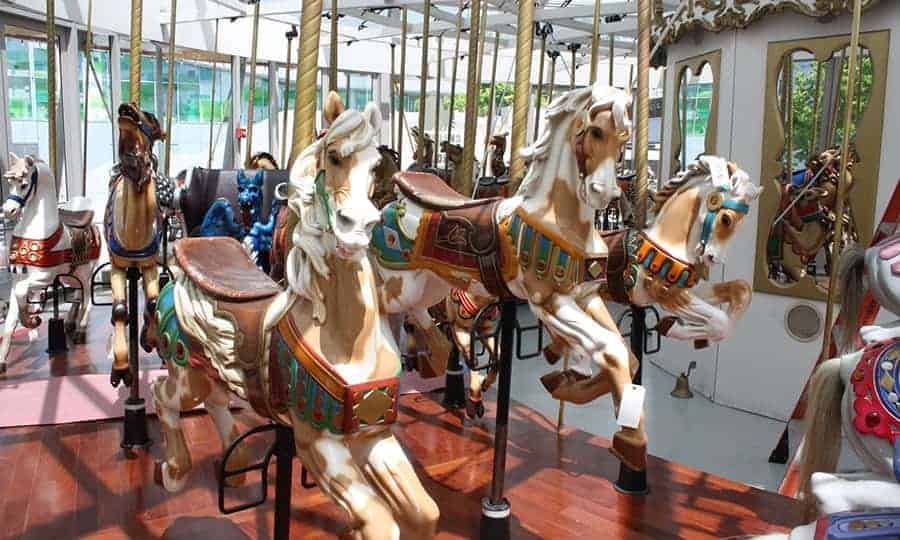 This Looff carousel was originally located in San Francisco and was relocated to Long Beach, California for a short while, then was refurbished and brought back to Yerba Buena Gardens of San Francisco. It was renamed the LeRoy King carousel after the former SF Redevelopment Commissioner (he brought his wife here for a carousel ride on their first date – so romantic!) 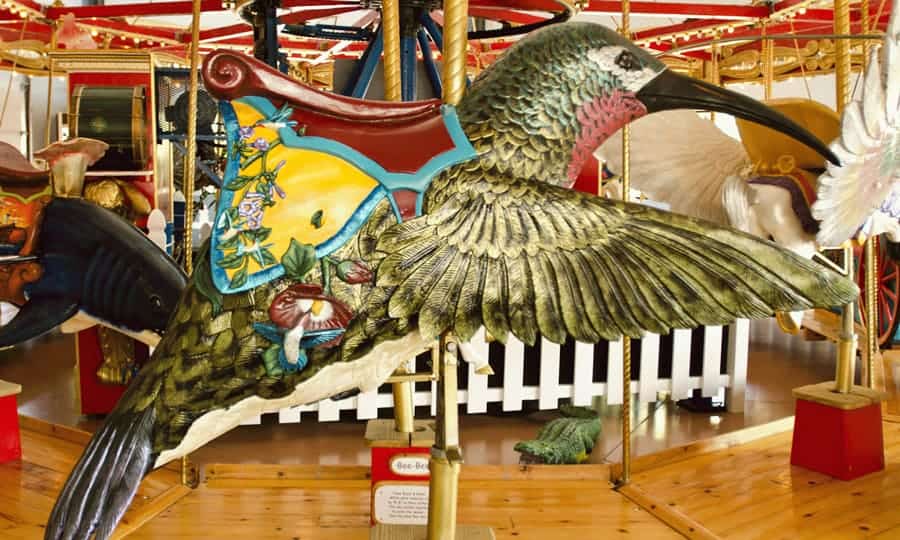 This California-themed carousel features 66 endangered animals and is located in the Los Angeles Zoo and Botanical Gardens. Instead of an organ melody, this carousel exclusively plays music by California musicians. 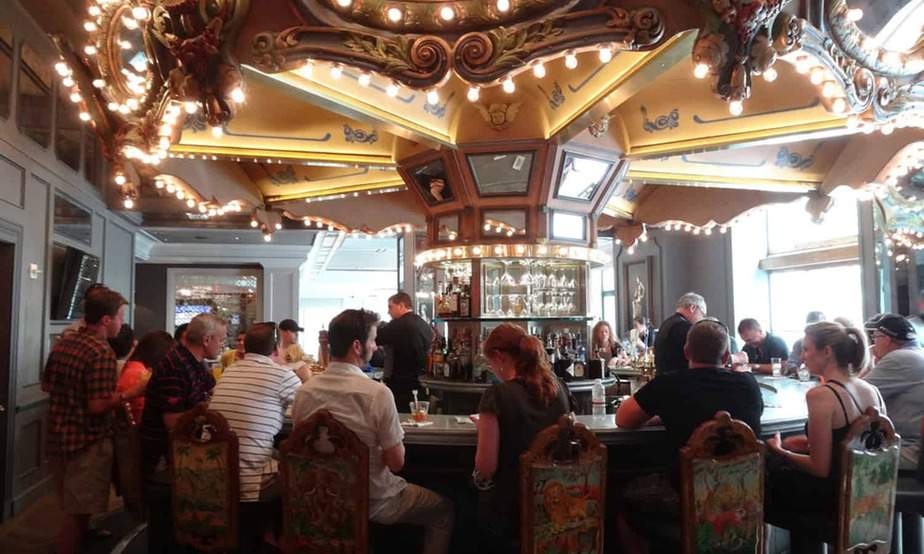 This carousel for grown-ups offers a unique experience for both locals and tourists crowded shoulder to shoulder enjoying exotic drinks. It has roots dating back to 1949 in the famous New Orleans 5-star Monteleone Hotel in the French Quarter. 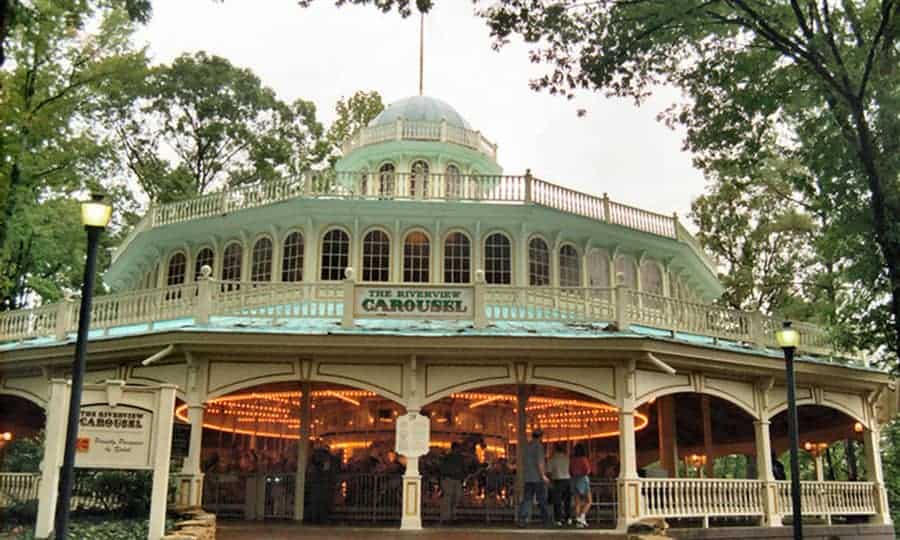 This is one of the largest carousels in the USA, a five-row beauty that debuted in Chicago’s Riverview Park in 1908. Known as the Riverview Carousel, it’s listed on the National Register of Historic Places.

This carousel from the 1920s located in a classic beach town is graced by a variety of animals, including an ostrich, pig, goat and a frog. It is one of numerous antique rides at Trimper’s on the boardwalk.

Morgan Bennett is a freelance writer living in the Wicker Park neighborhood of Chicago. He is known locally as a craft beer evangelist and collector of obscure movie trivia.
Posts by Morgan Bennett

The 50 Best Zoos (and Their Weirdest Animals)

The 10 Best National Parks to Visit During Winter