For many of us, animals are a significant part of our lives.

If you live with animals in your home, you know that keeping your home clean is important but also challenging. Air purifiers are among the most common tools used to keep animal dander and odors out of the air.

The Honeywell True HEPA HPA300 Air Purifier is our pick for the best air purifier for pets. As it turns out, it is also featured in several other of our ranking lists as well.

There are several reasons why we chose this particular air purifier for handling pet dander and odors, but a good place to start is the manufacturer.

Over time, Honeywell has grown significantly, rising to become a Fortune 100 company. They have developed a number of significant technologies, many of which were created for military use. Their ventures include the production of computers, cameras, and airplane control systems, among many, many other products. By far the most well-known is the round thermostat control found in numerous homes across the U.S.

With a reputation as an engineering powerhouse, Honeywell’s products are high quality. They have been producing air purifiers for over 75 years, and they are one of the most widely recommended manufacturers of air purifiers by doctors for people suffering from allergies. 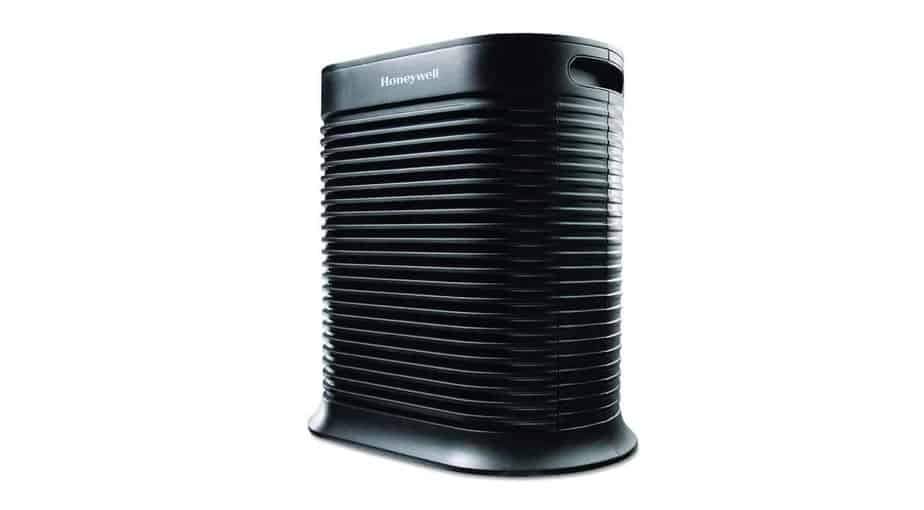 Honeywell offers a number of air purifier models, and the HPA300 is one of their top of the line products. Improving on earlier models, this air purifier uses three different HEPA style air filters, as well as an activated carbon pre-filter.

High-efficiency particulate air, or HEPA, filters are now the industry standard for filtration. These filters can remove up to 99.97% of fine particulates in the air larger than 0.3 microns. For reference, most pet dander is over 2.5 microns. And the HPA300 actually uses three of these filters.
The carbon pre-filter is a mesh layer covering the air intake. Activated carbon is excellent for catching larger particulates, like pet hair, and is especially efficient at capturing odors.

The carbon pre-filter can be vacuumed and is inexpensive to replace, coming in at around $8.

The True HEPA filters can also be vacuumed, but for optimal performance, they should be replaced every 12 to 18 months. These filters can be purchased on Amazon in a pack of three (bundled with the carbon pre-filter) for around $60.

The filters are accessible through a front cover and are generally easy to change out, though some users report that closing the front cover can sometimes be tricky.


The HPA300 offers four speeds, labeled “germ,” “general clean,” “allergen,” and “turbo.” The lowest and quietest speed is “germ” and is optimal for use in the bedroom.


Honeywell claims that at the highest speed, the HPA300 can recycle the air in a 465 square foot room up to five times. Though at this speed, the noise level does become loud.


Since the device draws air in through the front and sends it out the top, you can also place it in the corner.


Several additional features are also included in the HPA300. One is a useful timer that can be set so that the machine will turn off after two, four, or eight hours of operation. There is also a helpful dimmer that allows you to turn down the lights on the top of the machine, which is a welcome addition if you keep this machine in your sleeping area.


The device is also Energy Star rated, adding to its economic profile. And, there is a sensor to tell you when it is time to change out the filters.


The price point for the Honeywell True HEPA HPA300 air purifier is mid-tier, at around $300. But given the various features, outstanding quality of filtration, coverage, and limited five-year warranty backed by Honeywell, this machine is well worth the price. It will last for years, bringing you and your home sweet relief from pet dander and other allergens!