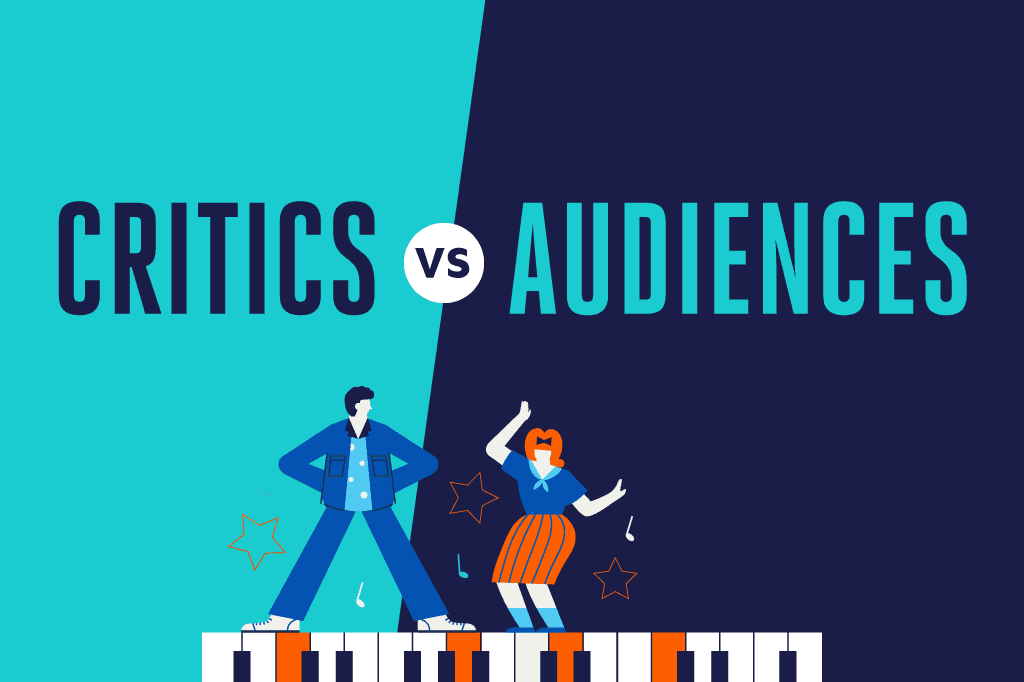 Movie critics work on the front-line of cinema, watching every film – no matter how terrible – to save you from having to watch a stinker. But what about all those times they took you to the wrong screen? The comedies they said would have you rolling in the aisles but instead had you snoring in your seat? The dramas they claimed were dumb, but which moved you to tears?

Most of the time, critics and audiences see eye-to-eye. But we’ve uncovered the movies where the ticket-buying masses disagreed with the experts: the most divisive motion pictures of the past forty years. Our method was simple but effective; we went to Rotten Tomatoes and took the average user and critic score for the top 100 movies in the website’s 17 featured genres. The difference between the two scores for each film revealed the divide between the critics‘ and the audience’s opinion on the movie.

Read on to discover which movies divided critics and audiences each decade, before we reveal the most divisive film director and movie genre of a generation.

The Most Divisive Movies of All Time

You couldn’t pick a more divisive subject for a movie than Knock Down The House, a documentary about Democrat Alexandria Ocasio-Cortez’s 2018 campaign for Congress. It is one of just nine movies to receive a perfect 100% from critics on Rotten Tomatoes in 2019, but its audience rating is a bottom-of-the-barrel 18%. Dare we imply the trolls and haters might have been out to damage the movie’s reputation?

Eight out of the top ten most divisive films of the past forty years were released in the last decade. In fact, none of the top 20 films were released before Rotten Tomatoes was launched on August 12, 1998 (Antz – number 14 – was released just two months later). This suggests that taking on the critics at their own game has become something of a sport for movie-lovers in the internet age. Are you not entertained?

Everybody loves ‘80s movies, right? Wrong! The top ten most divisive films of the 80s make for quite a bill, but there will be a few hecklers in the audience. Unbelievably, Steven Spielberg’s spine-tingling wrinkly alien classic E.T. is the most contentious of them all. There is a gap of 26% between what critics thought of it (out of this world!) and the audience response (bit of a crash-landing.)

From the gruesome (scuzzy vampire flick Near Dark) to the delightful (Tom Hanks body-swap comedy Big), there are five sci-fi/fantasy pictures in the top 10 divisive ‘80s movies. Filmmakers have their work cut out to get the right blend of weird, horrible, magical, and kind-of-cool for a genre audience that is famously opinionated.

Antz (1998) is “visually striking and dynamically shot” and “has strong characters and no shortage of incident,” according to respected critic Geoff Andrew. It also has a wonderfully eclectic cast, from Woody Allen to Dan Aykroyd to Anne Bancroft to J-Lo. And it features Sharon Stone and Sylvester Stallone, fresh off the steamy set of The Specialist.

So why have audiences rated it 41% lower than critics? Three good reasons! First, leading ant Woody Allen is a famously divisive actor and public figure. Second, Antz sure has a lot of Marxist subtexts. This may be deeply provocative to audiences raised on a diet of Hollywood-sponsored consumerism and Coca-Cola. And third, Antz is just weird for a mainstream movie: eclectic, philosophical, and with a cast of characters that look the same (little brown insects).

Are you the type of film-lover who refuses to watch any film with a poster where multiple characters are smiling? Movies with posters like this tend to be a certain brand of easy-going, which may be why critics don’t like them very much. Cinema is supposed to be serious and important, darn it! The most divisive film of the noughties is just such a film. American Outlaws features Colin Farrell and Ali Larter beaming un-threateningly on the cover. And it is our first number one movie to have been voted higher by audiences than critics – by a margin of 54%.

In fact, this is a pattern for the first decade of the 2000s. Critics also slaughtered Goal! (it’s just soccer!), First Descent (it’s just snowboarding!), Beerfest (it’s just The Hangover without the subtlety!), and September Dawn (it’s just awful!), while audiences loved them. Pokémon 3: The Movie completes the list, with just 21% from critics but 53% from audiences. History may still prove it an underrated classic.

The 2010s was a divisive decade in general, and the top three divisive films in our whole study are from the post-election, post-Brexit, post-TLJ era. The 2010s was also the beginning of the Netflix era, and three Netflix pictures are in the top 10 divisive movies of the decade. Knock Down The House, Hannah Gadsby: Nannette, and Strong Island are all rare examples of movies with a 100% score from critics. They are all about contentious issues of social justice, and they all got low votes from regular users of Rotten Tomatoes.

And how do you solve a problem like The Last Jedi? Rian Johnson tried to breathe new life into the series, but a significant number of tomato-wielding Star Wars fans ‘know what they like and like what they know.’ The movie got a critic score of 91% (compared to 53% for The Phantom Menace) but a mid-range audience score of 43% (an average rating of 2½ stars). Could it be a mix of high scores from those who found TLJ a bizarre thrill, and angry ‘zeroes’ from betrayed fanboys? Or are film critics just too snobby to admit that J.J. Abrams knows best?

To find cinema’s most divisive movie director, we opened up our study and analyzed the complete works of 600 top film directors across the entire history of film.

The number one, with an average critic-audience disparity of 26.9% across 10 feature films, is Adam Shankman. Critics and real people just can’t agree on Shankman’s pictures, from Matt Damon in Stuck On You (Critics 61%/Audience 35%) to J-Lo and Matthew McConaughey in The Wedding Planner (Critics 16%/Audience 59% – the clue is the cheesy smiles on the poster). In fact, the only film of Shankman’s that everyone agrees on is his remake of John Waters’ Hairspray. Even Waters himself agrees: “I was and am completely, totally happy with the movie musical.”

The top of the chart is dominated by filmmakers who made potentially ‘crowd-pleasing’ films – and risked disappointing swathes of popcorn-hugging pleasure-seekers and/or critics. Bob Clark (Porky’s) and Howard Deutch (Grumpier Old Men, The Odd Couple II, and The Whole Ten Yards) fall into this category. Other divisive chart-toppers are mostly mid-century directors whose films are respected by critics but bore modern audiences when they show up on TV.

The least divisive director that made our final countdown was Hayao Miyazaki, with a disparity of just 4.5% – because everybody loves Hayao Miyazaki.

Lots of film fans don’t bother with the critics – they just head directly to the genre section of their virtual video store and see what looks appealing. Their expectations may be very different from the values that a critic looks for when passing judgment on a picture.

Horror has the most consistently large divide among the 17 genres that we analyzed for critic v. audience ratings. The most divisive horror movie is 2015’s We Are Still Here, which critics admired for its subtlety and references to cinema history. Horror-lovers were left hungry for blood and a satisfying resolution. Comedies and animations split critics and audiences when there’s a big name involved, but the content fails to deliver genuine belly-laughs or the requisite dose of magic.

There are three genres where audiences tend to rate the films higher than critics: Sports & Fitness, TV Films, and Westerns. If they provide plenty of goals and/or guns, what does the viewer care if it’s not ‘art’?

Sure, film critics know a lot about cinema. But all that time spent alone in darkened rooms has given them some funny ideas. On the other hand, follow the public consensus, and it’s easy to miss some of the subtler wonders the seventh art has to offer. Aren’t you grateful that the internet lets us hear from both?

To create these graphics, we sourced data from Rotten Tomatoes’ lists of ‘Top 100 movies’ for 17 different genres. After removing duplicates, this gave us a list of 967 movies. By comparing the difference between the user and critic scores for every movie, we were able to calculate a ‘divisness gap,’ which allowed us to rank each film by how divisive it is. We then sorted each movie by decade and genre to give us the most divisive movies for both criteria.

For each film analyzed, we also gathered the name of the director to build a list of 600 film directors. For each director, we collected their entire filmography, including the critic and audience scores on Rotten Tomatoes. We then calculated the divisiveness gap for every movie in each director’s filmography and used these to calculate an ‘average divisiveness figure’ for each director’s film catalog. Of this large list, we removed any director who had 9 or less films on their resume to ensure that we were including truly divisive directors and not just directors who may have had one highly divisive film.

All data is valid from April 2020. Full research available on bit.ly/CriticsVSAudiences