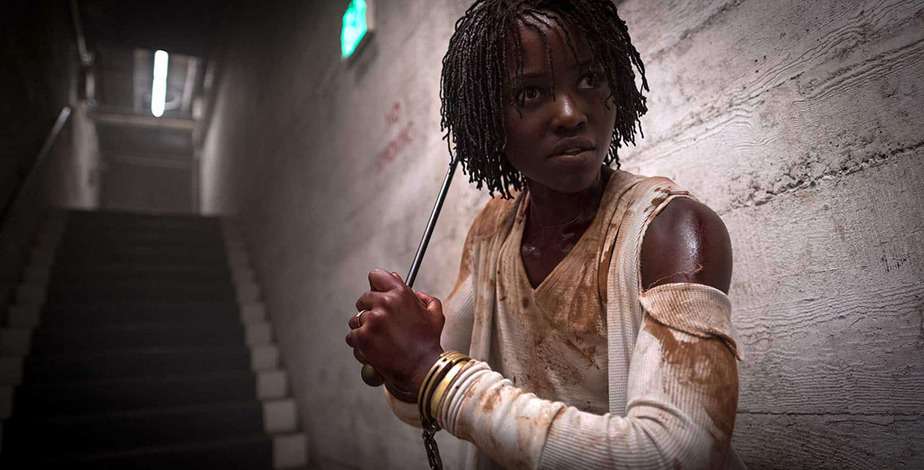 [dropcap size=big]J[/dropcap]ordan Peele’s first film, Get Out, was a meticulously plotted movie with a very specific metaphor in mind.

One of the reasons it did so well was because every element of the movie was placed in service of its central message about racism, cultural appropriation, and the objectification of black bodies.

The specificity and tight plotting of Get Out hangs over Us, Peele’s second feature, much like Lupita Nyong’o’s creepy doppelgänger. Us is a film that defies a singular close read, partly because it doesn’t want one, but also because Peele constantly stops just short of answering the questions he’s set up for viewers. 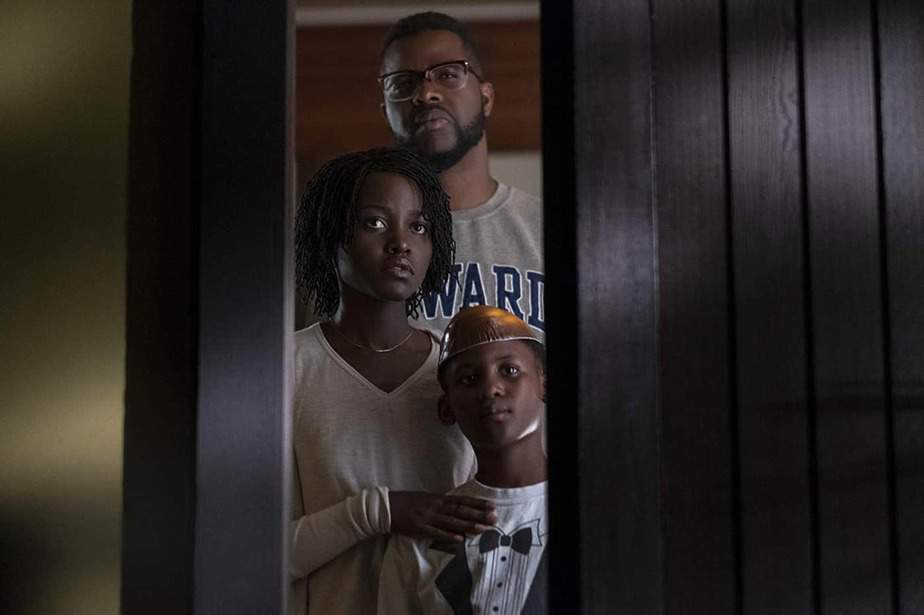 That approach results in a movie that’s fun and resonant, but frustrating too, showing gaps in logic that become harder to overlook the more frequently (and obviously) they pop up.

Us starts in 1986, with a young girl, Adelaide, taking a birthday trip to the Santa Cruz boardwalk, where she wanders into a Native American vision quest-themed hall of mirrors. Walking through the creepy, reflective hallways, Adelaide discovers an exceedingly spooky little girl who looks just like her.

As an adult, Adelaide (Nyong’o) and her family return to Santa Cruz on vacation, where, to her horror, she and her loved ones are confronted by not just the adult version of her double, but an entire family of angry, mutilated, murderous copies.

The film’s grim marketing belies the strong streak of dark humor throughout it. Us is funny as often as it is terrifying. As Adelaide’s husband Gabe, Winston Duke strikes a great balance between goofy dad and posturing tough guy.

Tim Heidecker and Elizabeth Moss are vapid fun as a pair of family friends. After their own doubles come calling, Heidecker’s performance quickly becomes one of the most enjoyable in the movie, second only to Nyong’o’s incredible turn. 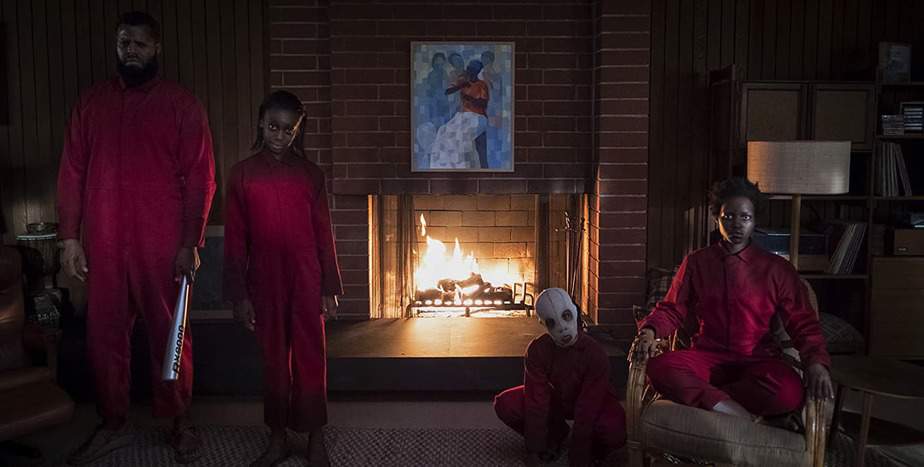 Speaking of which, Nyong’o is nothing short of incredible in her dual work as Adelaide and her double, Red. Both performances require distinct characteristics and intense physicality, and it’s uncanny how skilled the actress is at transforming herself into a close-but-still-wrong version of her own body through just a few small changes. When the two versions appear on screen together, the subtle distinctions between them are fascinating to look at.

Us has a lot of possible metaphors running through it, none of which ever quite fully fit. Its strongest, though, and the one that comes the closest to tying all the other threads together, relates to selective cultural memory.

Red tells Adelaide the history of the doppelgängers (who refer to themselves as “the tethered”), and it’s pretty grim. For generations, they’ve been stuck in abandoned bunkers and hallways underground, forced to mimic the actions of their above-ground versions, lacking light, joy, even language in most cases. They live the same lives and perform the same actions as we do, but never to the same successful ends. 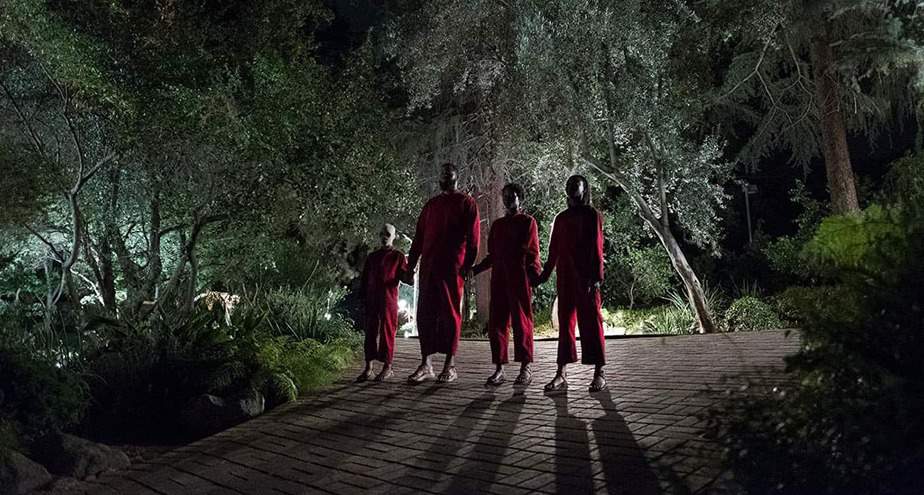 It’s possible to read this as a commentary on American culture’s tendency to overlook the darker elements of our past, or even the problems that plague our present. One could easily see the tethered as symbolic of all the population groups — African-American, Native American, LGBTQ, those in poverty — whose past and current suffering is often glossed over, to their ongoing detriment.

These groups represent the people who go through the same motions as more affluent, white, or straight Americans, but never achieve the same result. Many of us like to think of these as problems of the past, but the current hardships of those groups, in a capitalist system, allow for the continuing prosperity of others.

Examples of this in Us don’t just relate to the tethered, either. For instance, the insensitive 1986 hall of mirrors with the Native American shaman is updated in the present day to a “better” version, with a picture of Merlin slapped over the old sign. But just because you can’t see the racist, culturally appropriative version any longer doesn’t mean it’s gone. It’s still there, lurking under the surface. 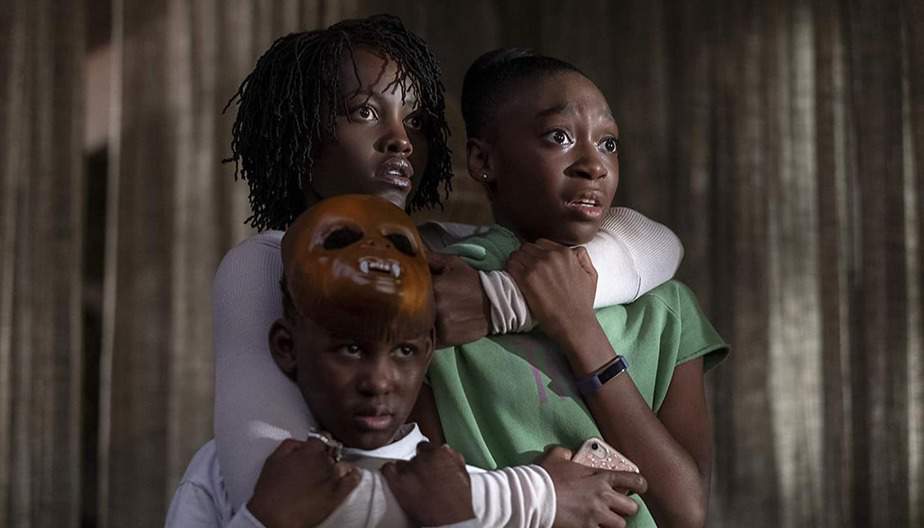 However, this is only one of many possible ways to look at the film. One suspects that, like hardcore fans of Stanley Kubrick’s The Shining (of which Peele is one), fans of Us will find lots of inroads to interesting and unexpected theories. What’s frustrating, and a little disappointing, about Us is its refusal to commit.

That’s not to say that everything a filmmaker does, particularly one like Peele who’s still figuring things out, has to be in the vein of their first movie. But given what we know he’s capable of, it would be great to see something more. It’s like the film is missing just one final step to push it into clarity.

That lack of clarity extends not just to the symbolism of Us, but also to its plotting. Peele goes about 80% of the way in building up the backstory of the tethered, explaining their existence and revealing how they emerged into our world. However, the 20% that’s missing includes some pretty basic details. 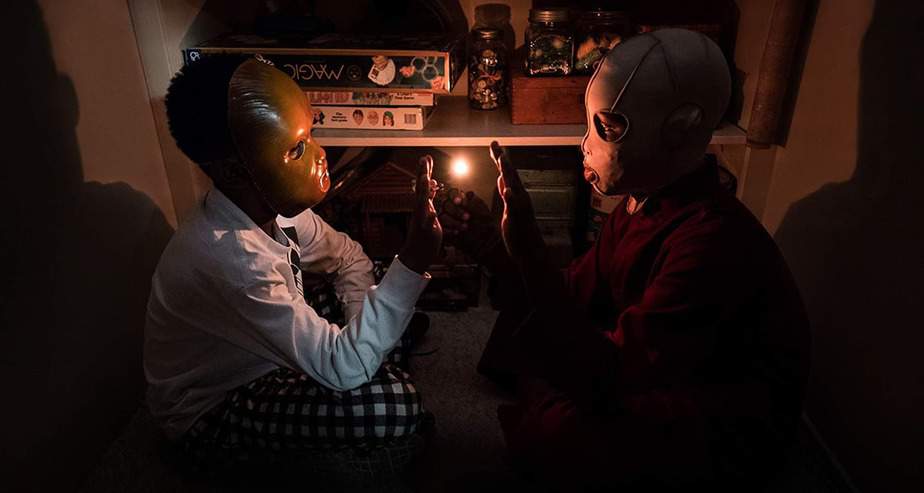 The other elements of the film are just strong enough that it doesn’t matter that much (comparisons between Peele and Steven Spielberg would be appropriate here, since Spielberg is the only other modern director who can pull that off), but it still lacks the moment-for-moment tightness that Get Out displayed.

Overall, Us is still a thrilling piece of work. It falls short of perfection, but still hits a high-water mark for the horror genre.

Comparisons to Get Out, while inevitable, are ultimately unfair, since Us isn’t trying to hit that point. It’s just a very entertaining horror movie with some interesting ideas under the hood, and that still counts for a lot.