[dropcap size=big]W[/dropcap]hen a remake comes out, it’s natural to want to critique it by holding it up to the film it’s remaking.

This is especially true of a movie with a devoted fanbase.

Dario Argento’s 1977 film Suspiria is a cult classic that’s widely respected among horror aficionados and film buffs alike. Everything about the movie is beloved among its fans, from the gorgeous primary color-based palette, complete with vibrant reds and cool, pulsating blues, to the fantastic score by Italian prog-rockers Goblin.

Given how revered Argento’s movie is, it would be easy to use it as the metric by which to judge director Luca Guadugnino’s just-released remake. But using an original film as a checklist for a remake, while in some ways unavoidable, isn’t always a useful way to employ critical thinking.

A good remake doesn’t care about pleasing fans of the original, or using clever callbacks, or operating as a carbon copy of the film it draws inspiration from. Rather, a remake should work on its own terms. It should be an artistic exercise that respects its origins, considers what its source material still has to offer modern audiences, and uses both to create a movie that’s good in and of itself.

That’s the best way to go into Guadugnino’s 2018 Suspiria: aware of where it comes from, but willing to consider the movie on its own merits. 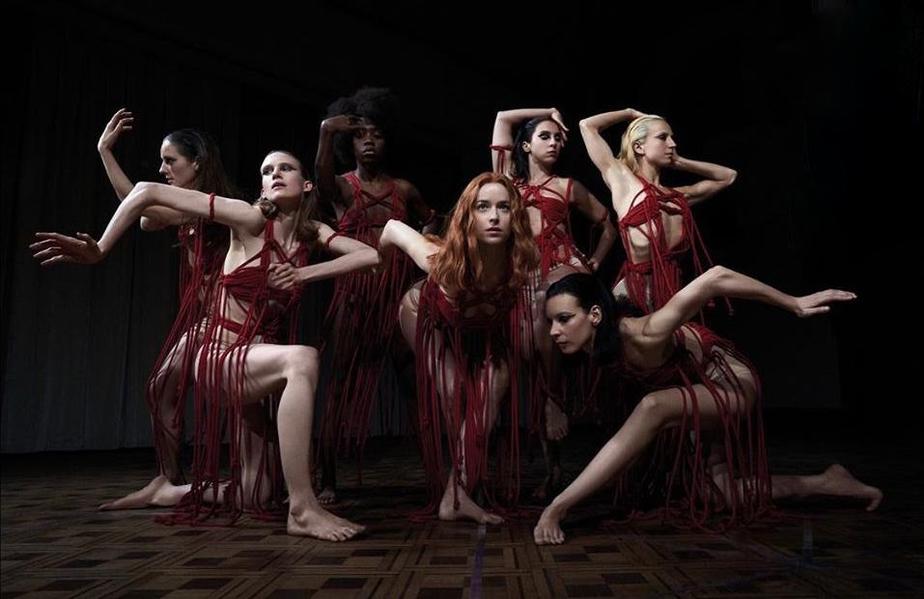 While it does have similarities to Argento’s original movie, Guadugnino’s Suspiria is a very different film. The film loses coherence in its last scenes, but the world it creates and the ideas it explores make it worth getting through the parts that don’t quite work.

Like Argento’s film, this Suspiria tells the story of Susie (Dakota Johnson), a young American ballet student who comes to Berlin to join a prestigious dance company.

In the original film, the German setting was mostly circumstantial. Here, however, Guadugnino and screenwriter David Kajganich dig deep into time period and location. 1977’s violent standoff between the Red Army Faction and the West German government provide the film’s cultural backdrop. 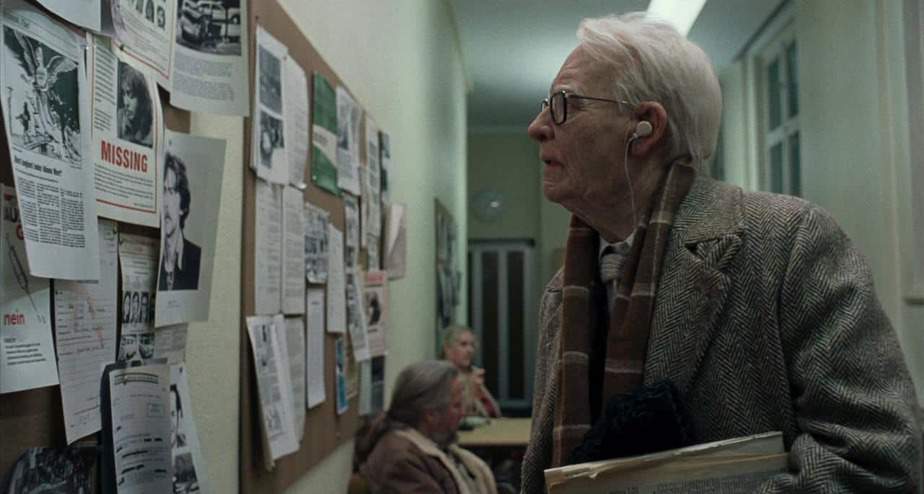 Patricia’s psychologist, Dr. Klemperer (Swinton again, in incredible makeup), is keen to find out what happened to his patient, who had a wild theory that the all-women faculty of the academy were witches, and that they were grooming her for an occult ritual.

As it turns out, Patricia’s suspicions are well-founded. The dance academy is home to a coven of witches with ancient ties, in the midst of their own internal power struggle. There’s a powerful supernatural force lying at the heart of the academy’s building, and Blanc is certain that Susie is the perfect candidate to commune with it, though in what way, and to what end, remains shrouded in mystery.

Guadugnino’s Suspiria is a wonderfully creepy, wintry piece of work, with the look and feel of the  setting embedded deep in its DNA. The sky is always a dreary gray, brutalist architecture dominates the landscape, and the characters dress primarily in wooly neutrals. 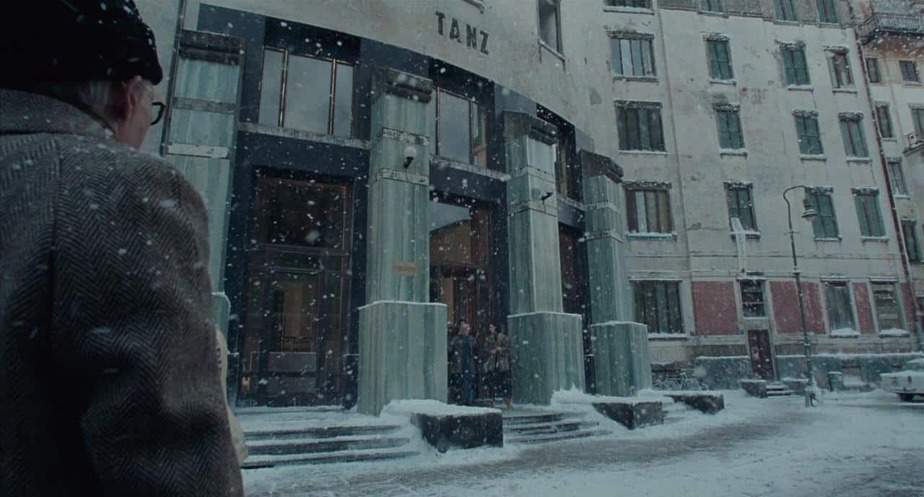 While it’s a major departure from Argento’s iconic bright, psychedelic colors, it’s much more accurate to the way central Europe looked at the time (and, in many ways, how it still looks today).

This Suspiria also plays with interesting ideas of female empowerment from the perspective of the witchy sisterhood at its center. The source of the witches’ supernatural abilities feels organic and body-focused, celebrating maternal ideas of movement, nurturing, and renewal, before it takes a violent turn into The Wicker Man-style sacrifice.

The witches are very aware of the ostracization of women in the world, and Suspiria lets them enact some pretty delicious revenge on patriarchal figures. They not only call out Dr. Klemperer for his hypocrisy, but go to town on members of local law enforcement as well, in one scene that’s a particularly dark and funny surprise. 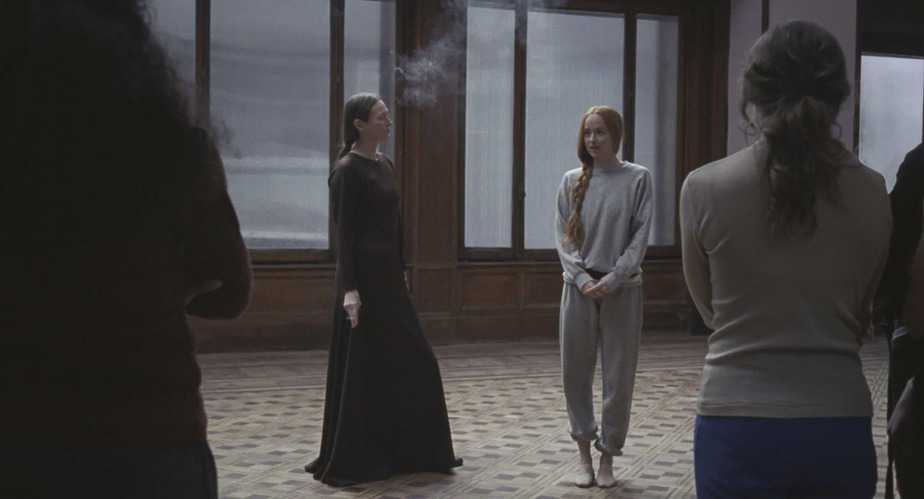 Dakota Johnson is suitably ethereal as Susie, by turns exuding innocence, self-assuredness, and a mysterious wisdom. But, no surprise, it’s Swinton who’s the MVP here.

Swinton is given 3 very different roles to play, 2 of them under nearly-unrecognizable heavy prosthetics. Suspiria is almost as much a showcase for her chameleonic talents as it is an artistic exercise for Guadugnino.

For much of its runtime, Suspiria is a strange, taut thriller. But in the last 2 acts of its 6-act makeup, the plot loses its structure as it makes ever-stranger reveals, culminating in a climactic bloodbath that looks amazing, but doesn’t quite gel with everything that’s come before. The movie’s final scenes redirect the film’s focus completely, for reasons that are never really clear. 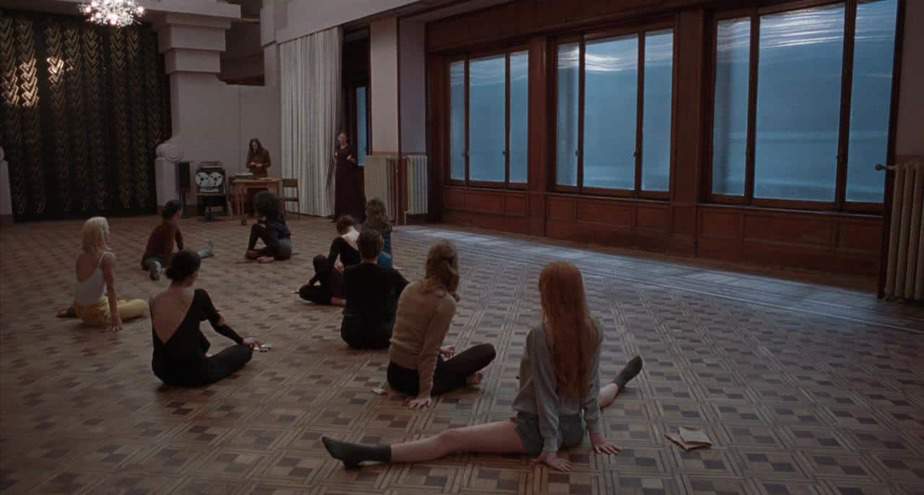 On top of that, Thom Yorke’s score for the film can sometimes be gorgeous, spare, and evocative, but any time he puts lyrics to the songs, it takes the audience right out of the experience.

It’s not just that the music feels inauthentic to the time period when so much else feels rooted, but that it doesn’t fit with the tone the movie’s trying to create. It’s as if Yorke watched the film, then created an album of music inspired by it, rather than trying to make something that lends to Suspiria’s overall atmosphere.

Luca Guadugnino’s Suspiria is a stylish, original take on its 1977 progenitor. It’s an atmospheric piece of arthouse horror that’s full of curious details, as well as some timely feminist elements.

However, when Suspiria loses hold of the plot, it loses big, and takes the experience from one of gory intrigue to one approaching confused indifference. It’s a shame, because so much of the rest of the film is worth unpacking and spending time with.

This is not Argento’s film, but instead an ambitious riff on the same plot that deserves to be appreciated free of comparison.