Here at RAVE, we’re in the business of finding the best of…well, everything. But that’s especially tricky when it comes to ranking the things that are truly subjective: the best carousels, the best pizza places in America, and, of course, the best Halloween movies.

There are hundreds and hundreds of horror movies out there. A few of them are works of art. Some are mediocre, some are lovably bad, and many are simply terrible. To inspire your October watch list, we asked the RAVE staff about their favorite movies for Halloween — whether that means horror films or any other movie that celebrates spookiness.

We came up with what we think is a pretty solid cross-section of the macabre, the unnerving, and the wonderfully weird. Take a look and let us know what you think. 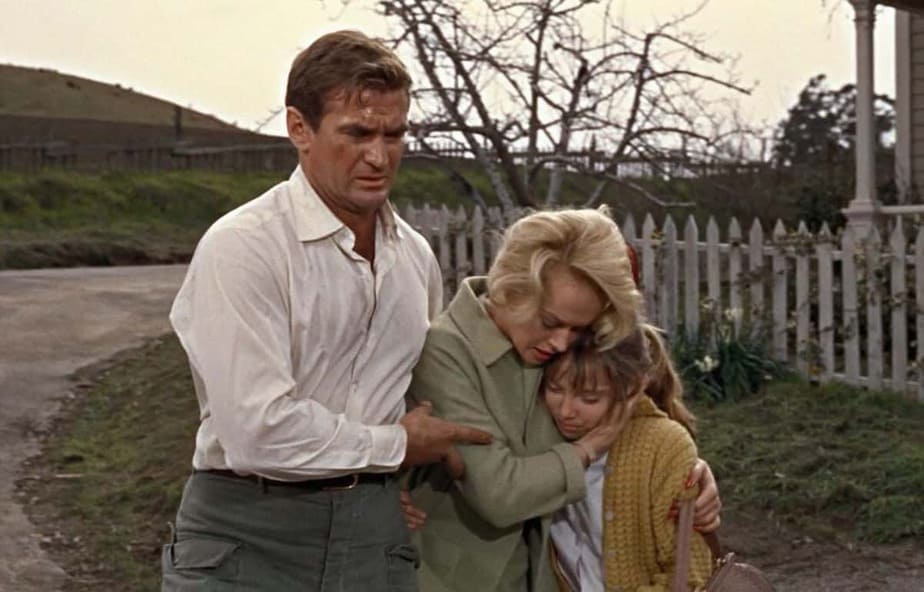 Autumn feels incomplete without Alfred Hitchcock’s 1963 psychological thriller The Birds. Sure, we enjoy watching the leaves turn colors and allowing ourselves to become mesmerized by the migrating birds above — but what if that giant mass of birds suddenly decided to swarm around you and gouge your eyes out of your face?

Cue the nearby adult who replies, “Now, why would you think of something like that?” But this is what Hitchock does best: He makes the unsensible sensible by instilling paranoia throughout our mundane lives.

Unlike modern horror films that use ultraviolent gore, The Birds uses idle camera movements and loud, grotesque noises to build suspense, which creates an uncomfortable, suffocating viewing experience. We would be remiss to forget how the film allows society to appear unnatural as humans are slowly chased out of town, or pecked to death.

This film is perfect for creeping out in-laws, waking up your neighbors, and scaring children into fearing animals. Enjoy!

Watch The Birds on Amazon Video. 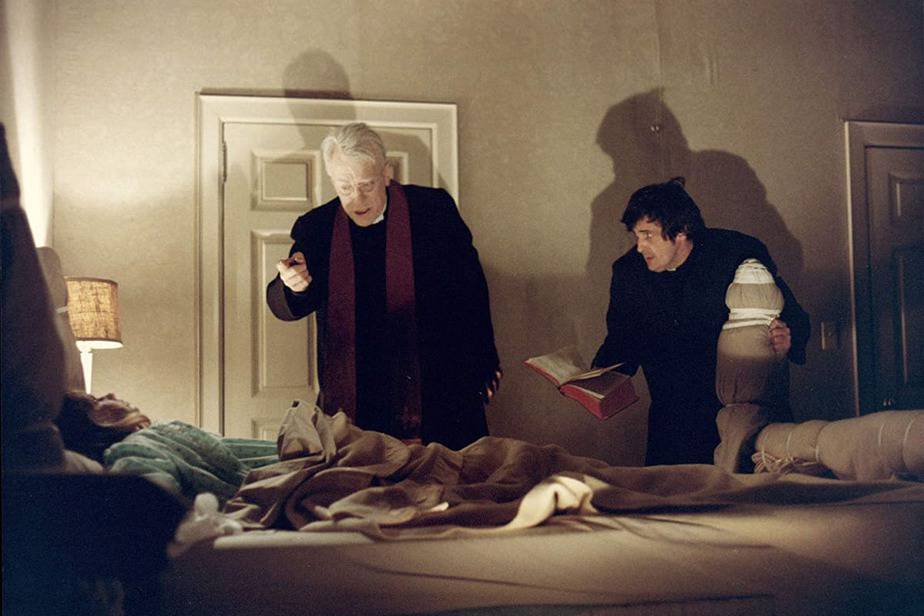 William Freidkins’ 1973 adaption of William Peter Blatty’s novel, The Exorcist, is a terrifying myriad of grotesque visuals and taboo concepts. The Exorcist not only shook Hollywood and the Academy but also brought America’s shifting attitudes towards Roman Catholicism and atheism into question.

The Exorcist isn’t just an American classic — it’s also scary as hell! October fright nights are not complete without watching a demon-possessed 13-year-old girl spray green vomit across the room, or turn her head 360 degrees.

Oh, did we mention that nine people connected to the film died during production (including two actors who were scripted to die), or that the entire set mysteriously burned to the ground mid-production? During the film’s first screening in Rome, right next door to the theatre, an old church was struck by lightning, causing a 400-year-old cross to come crashing down into the piazza. Are you daring enough to watch a film that is allegedly cursed? “The power of Christ compels you!”

Watch The Exorcist on Amazon Video. 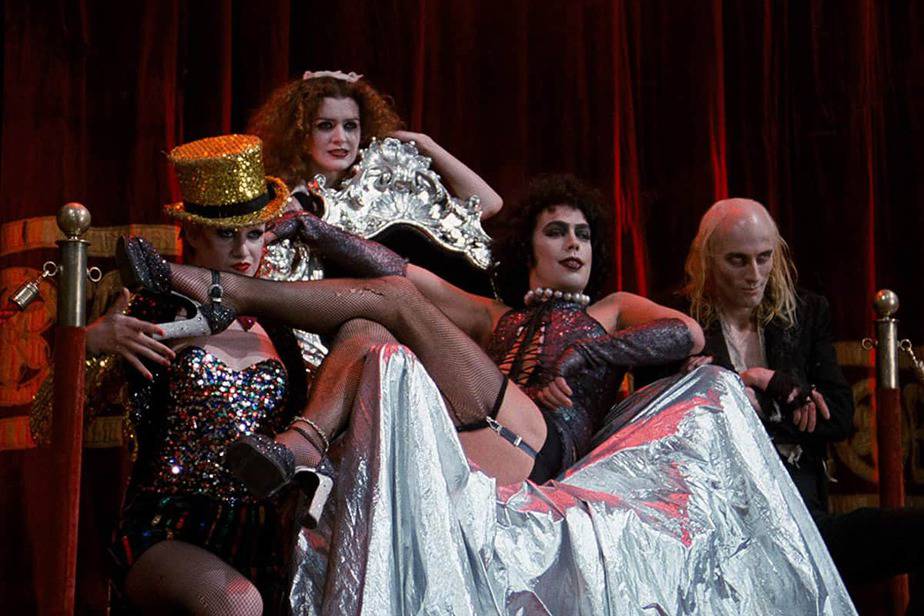 This cult classic is an eclectic mix of musical, horror, and comedy. The story starts with an engaged couple who come across a castle. Inside this castle are people in elaborate costumes, and the owner is a mad scientist and alien “transvestite” who created a muscle man. Chaos ensues, complete with jealousy, seduction, and murder.

The film is so iconic that there are theater groups that perform the whole movie on a stage while it’s projected in the background. As an added bonus, seeing this film live involves a lot of audience participation, including throwing rice into the air and doing the Time Warp dance.

Embracing the weirdness and the confusion of figuring out your relationship with sexuality, this movie tends to be a warm, confusing hug for outcasts, theater kids, and the LGBTQ+ community. The unabashed characters, outlandish outfits, dance numbers, and themes of power and embracing sexuality makes this a movie people either love or hate. You can guess which side I’m on. 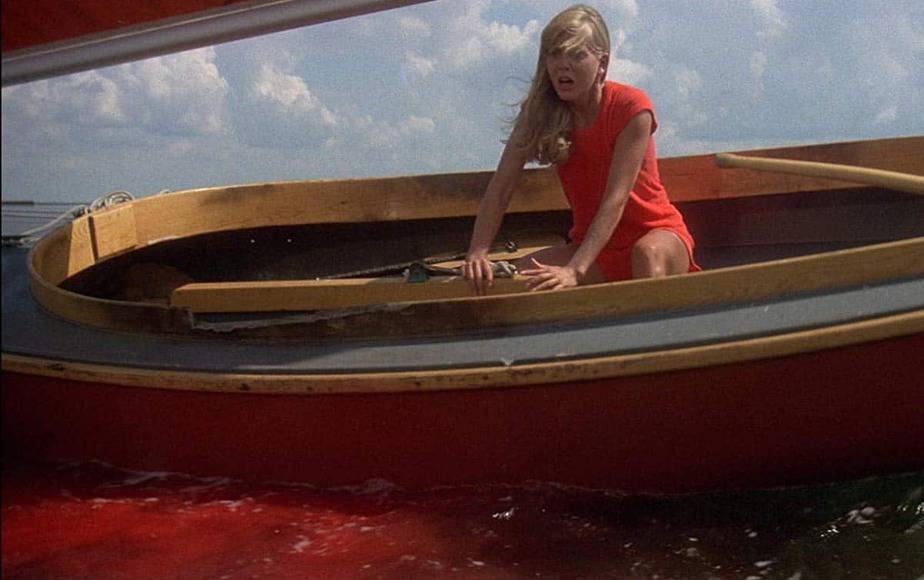 I know what you’re thinking: That’s a bad summer sequel. What does the Jaws franchise have to do with Halloween?

While classics like The Texas Chainsaw Massacre and Black Christmas preceded the original Jaws, its sequel unexpectedly pivoted to a genre that would explode in cineplexes across America for the next ten years. Released four months before Halloween, and years before teen slashers Friday the 13th and My Bloody Valentine, this film has everyone’s favorite animatronic shark playing the role of the unstoppable killer on the loose.

Jaws 2 is a proto-slasher film. While the adults from the first film return (including Twitter sensation Mayor Larry Vaughn), they take a backseat to the teenage victims, er, cast. Breaking from its predecessor’s thriller/adventure template, Jaws 2 picks up a few years later on the island of Amity, with Sheriff Brody’s now-teenage son and his friends back on the open water.

The slasher era’s trope of a psychopath punishing the unholy trinity of teenage drinking, drugs, and sex are all there, with the moral “Respect your parents’ rules or you’re gonna get it.” This time, the bawdy teens are shredded by the razor-sharp teeth of a great white as opposed to a machete or meat hook. Like other horror antagonists that just won’t die, the killer shark doesn’t disappoint. One scene features the shark hunting its prey, consuming a motorboat, getting doused with gasoline and shot with a flare gun, surviving the resulting explosion, and continuing on, carrying the charred scars of the encounter.

Panned after its release, Jaws 2 comes off as a silly sequel (a shark downing a helicopter? C’mon). As it turns out, it was ahead of its time. I’m not saying the slasher genre wouldn’t exist without it, but it deserves to be mentioned with the slasher classics — albeit in a sun-dappled locale as opposed to the grim moonlit tone of its successors. 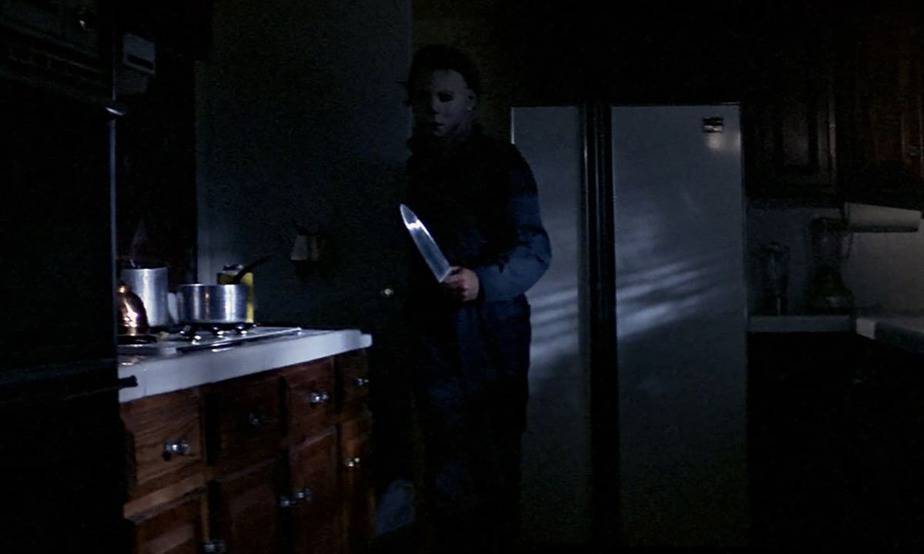 Silent killer in a creepy mask? Check. Clueless teenagers? Check. Gruesome murders? Check. The first Halloween movie defined all the necessary tropes of the slasher subgenre, leading to innumerable copycat movies throughout the 1980s. Famously made on a budget of only $325,000 but earning $70,000,000 at the box office, Halloween is one of the most successful independent films of all time.

Teens are trying to party on Halloween night. A maniac escapes from a mental institution and starts murdering them. That’s pretty much it plot-wise, but Halloween is so much more.

The psychotic killer Michael Myers is the star of the show. He pops out for jump scares. He lingers, staring, stalking, building a palpable tension. Many of the movie’s most unsettling shots are filmed in first person from Michael’s point of view, bringing the viewer uncomfortably close to the horrors he acts out. This includes the now infamous opening scene, a five-minute continuous shot establishing Michael’s origin.

And hey, it’s called Halloween, takes place on Halloween night, and involves one surly trick-or-treater. Sounds like the perfect movie to celebrate the holiday. 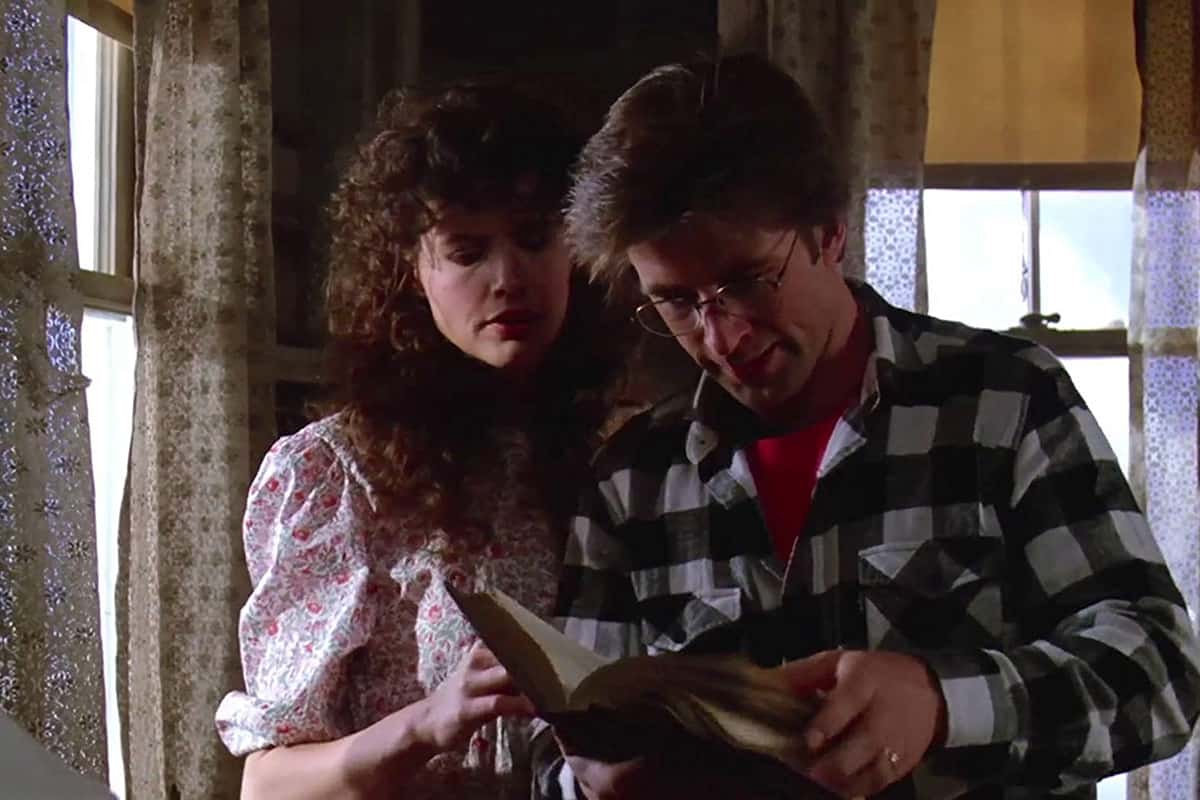 Say his name three times and Beetlejuice, the titular character of Tim Burton’s 1988 horror-comedy classic, makes his appearance to cause devious mischief.

After their sudden death, Barbara and Adam Maitland find themselves in purgatory, stuck as ghosts in their old home. They’re unable to do anything as the Deetzes, an obnoxious couple, and their goth daughter, Lydia, move into their home and change everything about it. Fed up, they hire Beetlejuice, a self-proclaimed “bio-exorcist,” to scare away the Deetzes so they can spend their afterlife in peace.

Things turn sour when the Maitlands discover that Beetlejuice is more devilish than they thought. They find themselves and Lydia, the only living being that can see and talk with the dead Maitlands, in danger from Beetlejuice’s reign of mischief.

Beetlejuice is as creepy and morbid as it is funny and cartoonish — just what you’d expect from a Tim Burton film. The characters are larger than life, and that’s saying something since half of them are dead. At times, the narrative leans into the nonsensical and fantastic, but it adds to the charm of this ghost story. Michael Keaton’s Beetlejuice steals the show, causing panic among the living and the dead, and laughter from the audience. 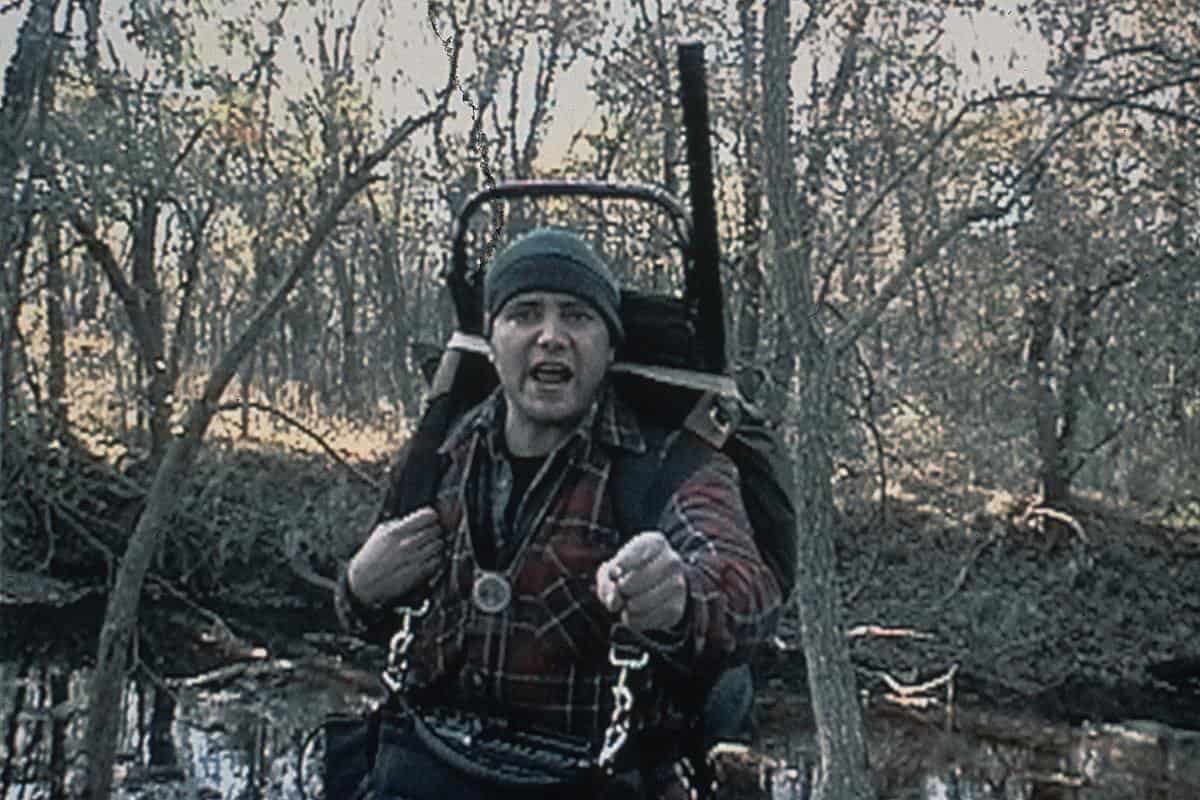 There is one reason that The Blair Witch Project is the best horror movie ever made: People actually believed it was real. The movie was posed as the actual footage of three missing film students that had been recovered by police.

The students were documenting a local legend about a woman, executed for practicing witchcraft, who still haunts the woods in Burkettsville, Maryland. The tapes revealed the three campers becoming lost in the woods, damaging a strange collection of talismans, and then being followed by an unknown presence.

Daniel Myrick and Eduardo Sánchez wrote, edited, and directed the exceptionally short screenplay. The raw footage was only 20 hours of improvisation by Heather Donahue, Joshua Leonard, and Michael C. Williams in the woods with handheld cameras. The film was a surprise hit at Sundance that went on to become a major release, and later paved the way for a new genre of film known as “found footage.”

However, throughout all levels of production, Sánchez and Myrick planted seeds to convince the audience that this film was real. At Sundance, the creators of the film handed out missing person flyers, asking anyone to come forward with information regarding the three lost students. IMDb listed all three of the actors as “missing, presumed dead” in the credits, and a mockumentary titled Curse of the Blair Witch was released on the SciFi channel in 1999 prior to the release of the actual film. Curse of the Blair Witch documents the active police search, featuring newsreels and convincing interviews with fake friends and family of the students.

The Blair Witch Project is terrifying on its own; Donahue gives a convincing and emotional performance that sends chills down your spine. In fact, because the movie was not filmed by professionals, the shots were shaky and often out-of-focus, which caused some audience members to experience nausea and vomiting. Stories of this eventually spread to the general public and The Blair Witch Project became the movie that was so scary it would literally make you vomit!

Placing doubt in the mind of the viewer as to whether or not this footage was real was enough to cause a panic. That is why The Blair Witch Project is the best horror film ever made — it can never be repeated. It was the first of its kind.

We hope we’ve inspired you to get scared this Halloween season. If you’re ready to make some spooky travel plans, be sure to check out our ranking of the Best Halloween Towns in America.

Until next time, RAVE readers…unpleasant dreams.