In his debut collection, As Summer’s Mask Slips and Other Disruptions, Gordon B. White compiles thirteen of his works that have previously been published in such venues as Nightscript, Tales to Terrify, and Borderlands, as well as two pieces original to this collection.

In these fifteen stories, Gordon expertly blends classic horror and dread with something more subtle and uncanny, with characters drawn so richly that they’ll pull you in, then drip you into the pit of heartache. Drawing from traditions of the Weird and Southern Gothic, these tales charm and unsettle in equal measure.

In “Hair Shirt Drag” we learn the history of an ancient line of family magic, their gift passed matrilineally, and finally in possession of the last of their line—a genderfluid son, scorned by their own family just as their family had been scorned by the village. 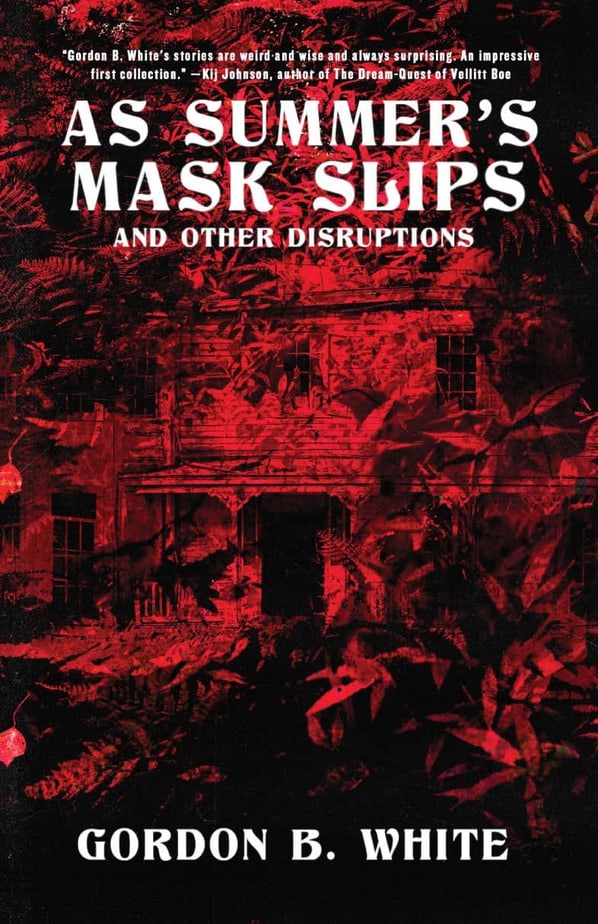 The family’s right to their land echoes Jesse’s right to occupy space in the world. Pagan ritual and Christian morality clash, till a stronger medicine comes along. Every line of this story builds anxiety, and grief and triumph become indistinguishable.

“We Eat Dirt and Sleep and Wait” reads like a dark fairy tale tinged with insanity. In a house under the dirt, we hear the singing of worms, like whale song. There is a blind boy in the house, and an old woman who comes to tell the boy a story. There are stories within stories in this piece, and each layer digs a little deeper into the heart of the horror that unfolds.

If not for the contemporary setting, one might mistake this for an ancient story passed down for generations. The imagery spares nothing, and the sensory details White provides collide with the surreal plot, creating an effect that is both vivid and disorienting.

“The Lure of the Lollipop Tree” tells the story of Jim and Laurie, a couple at odds in a way that is immediately understandable, relatable. He has a manic desire to have children, and she does not want to try anymore. Her career has blossomed and moved them to a new town, where Jim takes on a domestic role that chafes at his masculinity. He isn’t providing, he isn’t procreating, and he fails to find a purpose outside of those tasks. 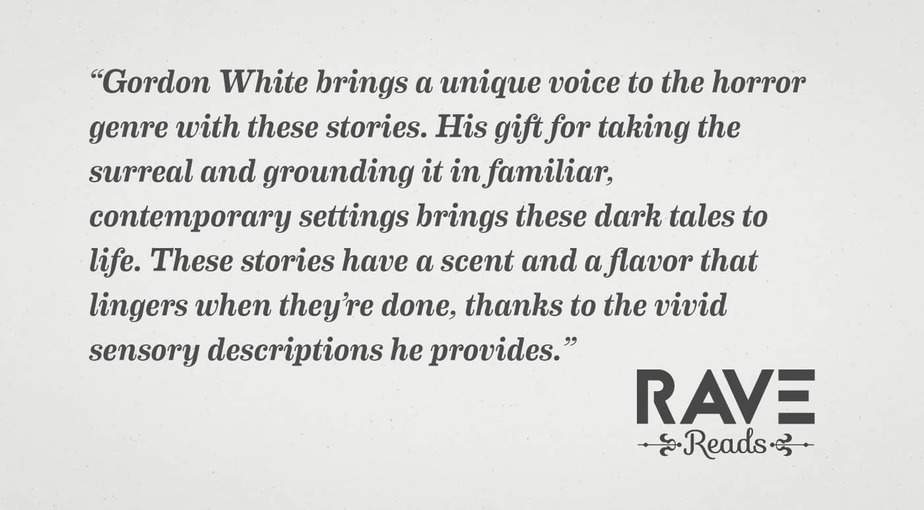 When he suspects Laurie is pregnant, his mania ignites, and he throws himself into building a world in conflict with reality, for a family that does not exist. White drives the reader through a gamut of emotions, from sympathy, irritation, disgust, to fear as we can’t help but witness this descent into something much darker. The piece explores what it means to be a man, and picks apart the self-destruction that comes of limiting that view to such a narrow focus.

In “The Buchanan Boys Ride Again” a semi-estranged father and his teenage son are spending a tense weekend together at the motel where the father now lives. A biblical rain causes all the drains to back up—and something more than water is coming up with it. Sentient hair clogs are creeping up the pipes and throttling the poor families forced to live in that rundown dump. There’s plenty of horror there, but it’s balanced by the wholesomeness of the bond that forms between father and son as they fight to rescue their neighbors, and each other, from the monsters in their walls. It reads like classic camp horror, but there are layers here, as well.

Only half the horror is in the reeking drainage. The other half we see as the two make their way through the building, witnessing the conditions their fellow humans lived in, even before the clog monsters emerged. There’s the horror of poverty, here, and the effects it has on families. This piece will be fun for lovers of classic horror, and for those who like their reading with a heady dose of metaphor.

“Eight Affirmations for the Revolting Body, Confiscated from the Prisoners of Bunk 17” contrasts headings of body-positive affirmations with a story about aliens who devour human flesh and wear the skins as suits. The human prisoners of Bunk 17 are determined to escape their alien oppressors.

The story is told in reverse, from a moment of revolution and murder, back through the slow complicity of a looming threat, infighting and power struggles, through the crisis of desperation, to the dark beginning of the war—to hope.

Throughout, the horror is less the flesh-eating aliens, and more the way their oppression turns them against one another, how fear and power corrupt the painfully human dynamics of the twenty women, and how Maria’s desperation leads to her end, in the beginning.

Throughout the collection, we see the supernatural imposing itself and testing the limits of human bonds, of relationships. The horror creeps in when the bonds break. The stories leave us questioning the strength of our own bonds, especially against the prodding finger of contemporary horrors that fill the newscasts every day. These stories are dark and surreal, but all too familiar, and even when they slide into full Weird, the horror feels hauntingly plausible. 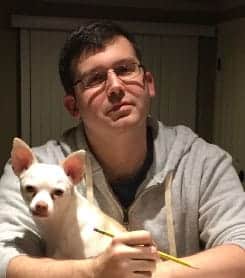 The settings for these stories are often our own homes, our cars, or in the comfortable places we experienced as children. They’re in safe places, where things have gone wrong. Many of the pieces involve isolation or the sense of being trapped, and sometimes both.

Gordon White brings a unique voice to the horror genre with these stories. His gift for taking the surreal and grounding it in familiar, contemporary settings brings these dark tales to life. These stories have a scent and a flavor that lingers when they’re done, thanks to the vivid sensory descriptions he provides. The writing itself reads like a dream state, but one where there’s just enough detail that you are forced to suspect that the nightmare is real.