Drew Goddard’s new film Bad Times at the El Royale takes a bunch of strangers, sticks them in a location full of intrigue and secrets, and lets them bounce off each other, creating an opportunity to dive deep on themes of identity, morality, and guilt.

Goddard is hardly the only person to use this device. Strangers stuck together in tense situations or confined spaces have produced fantastic pieces of pop culture for decades, combining mystery, comedy, social commentary, and ensemble casts.

So, how does Bad Times at the El Royale stack up against other pop culture artifacts of its kind? This ranking takes a look at some notable examples from the last few decades.

Over the years, there have been an awful lot of shows and movies that have incorporated the “strangers stuck together” idea. But they didn’t all make it onto this list.

To create our ranking, we took into account both objective and subjective factors. Here were our criteria:

Using this set of criteria, we’ve compiled the following: 10 great variations on a theme. 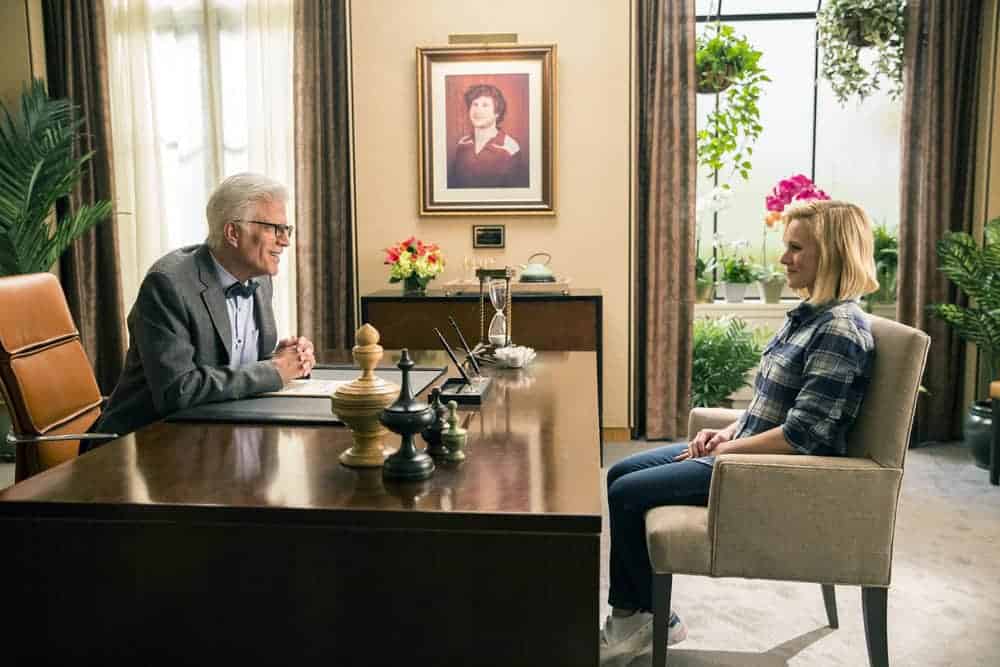 Michael Schur’s philosophical sitcom The Good Place (which also happens to be produced by Bad Times at the El Royale director Drew Goddard) is a critical darling, and for good reason.

The show started off with one of the strongest pilots in recent memory, and only got better from there, with consistently delightful writing, a rock-solid ensemble cast, and episode-ending cliffhangers that’ll leave you hungry for more.

In the show, Eleanor (Kristen Bell) wakes up in the afterlife, where she learns she’s made it to “the Good Place,” a sunlit paradise created by omnipotent architect Michael (Ted Danson). Here, she’ll live out the rest of her days with her algorithmically-matched soulmate, Chidi (William Jackson Harper) in a cute neighborhood, with an unlimited supply of fro-yo and jumbo shrimp.

The problem: Eleanor, a self described “trashbag,” was a horrible person in life, and knows she doesn’t belong alongside folks like philanthropist Tahani (Jameela Jamil) and Buddhist monk Jianyu (Manny Jacinto). But Eleanor’s not the only imperfect person who’s made it to the Good Place, and there’s more going on behind the scenes than anyone knows.

The Good Place is primarily a show about how people try to redeem themselves, and the ways we define goodness. Schur and his writers make an effort to get the philosophy right, too. They consult academics in the field to correctly apply the work of philosophers like Plato, Kant, and Kierkegaard to the ideas they explore in the show.

But if all that sounds too heady, don’t worry. There are also epic puns throughout. 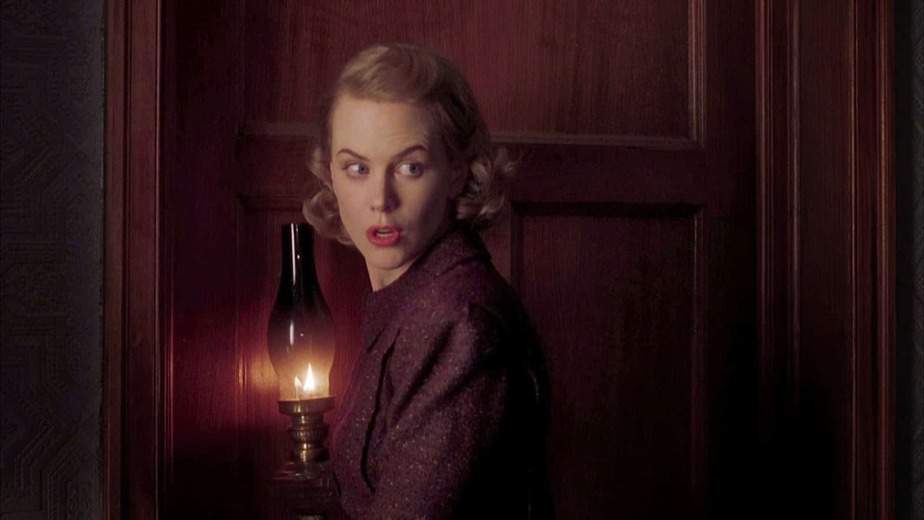 Old, dusty mansions make a perfect setting for “strangers stuck together” stories (see And Then There Were None, Clue, and The Haunting, all of which we’ll get to). You’ve got a secluded location full of creepy secrets, and a group of folks thrown together to discover those secrets for themselves.

The Others makes excellent use of its spooky country house, leaving plenty of opportunity for an increasingly hysterical Nicole Kidman to uncover frightening artifacts and run into her uncanny crew of servants (and her even more uncanny kids).

The film features one of the more memorable “big-twist” endings of the last 20 years. The ending might seem like a cliche, but only because this movie mastered a reveal that so many others went on to copy.

And Then There Were None 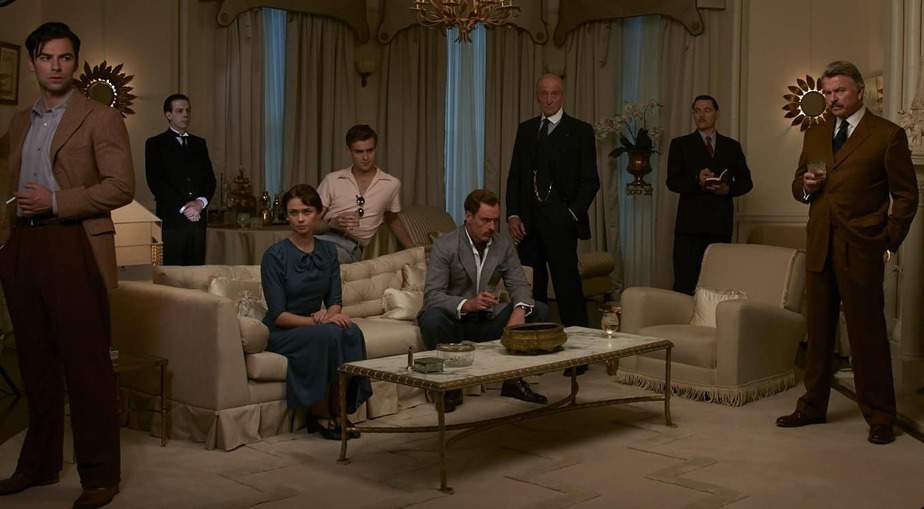 Agatha Christie’s classic 1939 novel And Then There Were None has been adapted several times for film and TV, and influenced plenty of shows and films that came after it (several of which are on this list).

In 2015, the novel was made into a chillingly satisfying 3-part miniseries that included Sam Neill, Poldark’s Aidan Turner, and Game of Thrones’ Charles Dance among its top-shelf cast.

The story goes like this: A group of strangers each receive invitations to stay for the weekend at a secluded estate off the coast of England. Shortly after their arrival, the guests start being killed off, one by one.

It quickly becomes clear that each of the characters has a dark secret in their past, and the mysterious murderer — who must be among them — is determined to make them pay for their past misdeeds with their lives.

The secrets are juicy and the climactic plot twist is a dark delight. The cast are appropriately despicable, sympathetic,and, yes, even sexy (Turner’s smoldering mercenary could easily give Chris Hemsworth’s El Royale villain a run for his money). 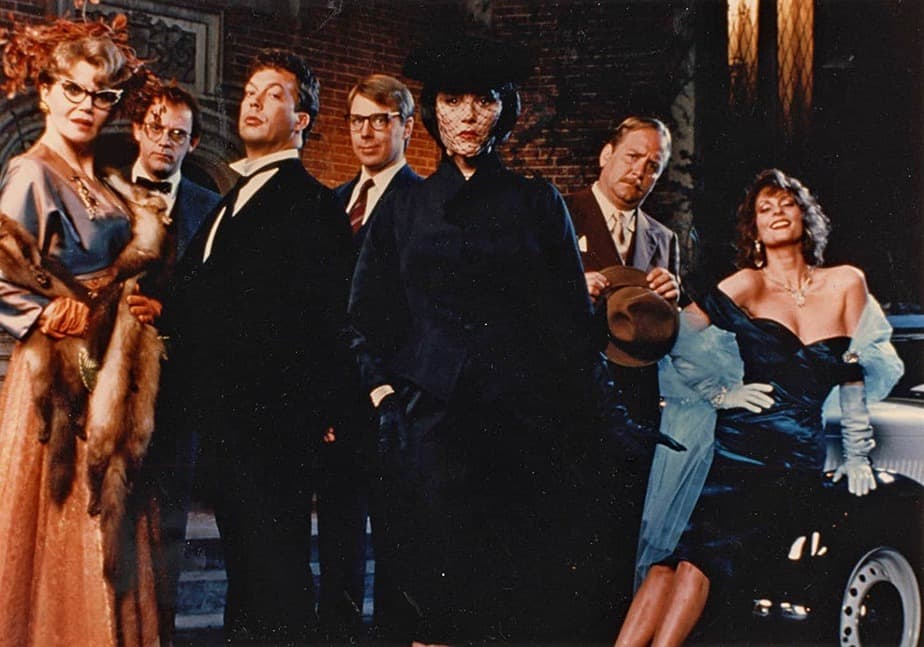 Originally a failure upon release in 1985, the court of public opinion has helped Clue become a beloved cult classic in the 30-plus years since it hit theaters, helped in no small part by countless cable reruns.

At the time, critics scoffed at the idea of a movie based on a board game, as well as the movie’s multiple endings. On home video and cable, the endings are presented back-to-back. In the theater, however, 3 separate versions of the film were released, and audiences didn’t know which ending they’d get.

As the guests try to figure out who killed their host, the body count keeps rising until the final reveal — or, rather, reveals.

“Five Characters in Search of an Exit” 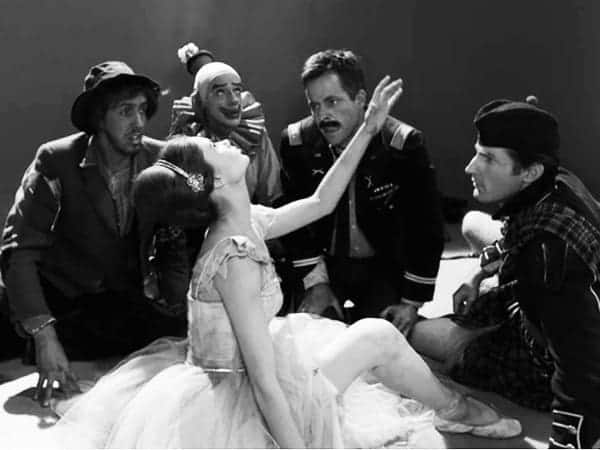 Rod Serling’s classic anthology series is known for its use of irony, and for unique setups that pay off in macabre, unexpected ways.

“Five Characters in Search of an Exit” is one of its more famous uses of both. It also has a more minimalist take on the setting in which the characters find themselves stuck together.

A soldier wakes up in a round room with high, smooth walls. He has no idea how he got there. His fellow captives — a clown, a ballerina, a hobo, and a bagpiper — have similar stories, and they’re all desperate to get out.

The true nature of the room, and the real identity of the characters, may feel easy to figure out. In true Twilight Zone fashion, however, the big reveal itself is a nice, twisty moment that pulls the rug out from under the viewer. 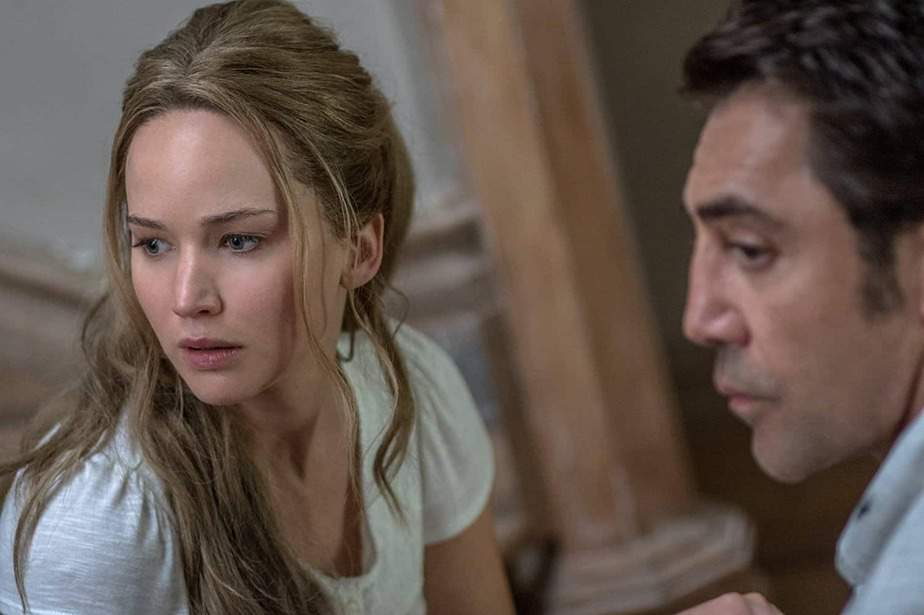 A polarizing work from director Darren Aronofsky, Mother! hit theaters in September of 2017. When it was released, some praised the film for its boldness and creativity, while others left shaking their heads, befuddled.

Polarization can sometimes be a sign of visionary accomplishment, and while Mother! didn’t work for everyone, it’s hard to deny the amount of ambition in Aronofsky’s movie, or the genuine surprises of the film’s twists.

In the film, Jennifer Lawrence plays a woman renovating a country house with her husband, a poet (Javier Bardem). One day, a strange man (Ed Harris) shows up at the house to visit Bardem, followed shortly by his wife (Michelle Pfeiffer). What follows after becomes a strange, sprawling allegory in which the entire narrative of the Old and New Testaments, as well as some comments on contemporary religion, unfold, all completely contained in Lawrence and Bardem’s home.

People stream in and out of the house, fixtures are broken, characters are attacked and murdered, all swelling into a disturbing crescendo before abruptly coming to an end. 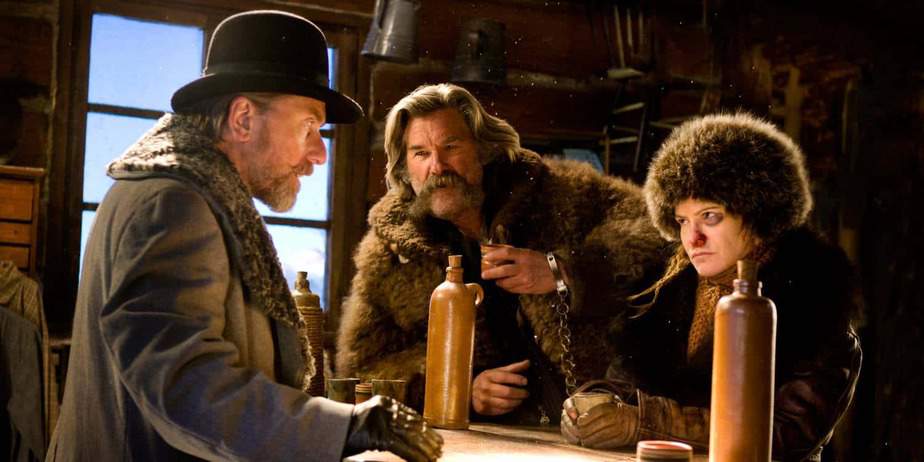 Quentin Tarantino’s throwback to the classic westerns of Hollywood’s golden age is perhaps stronger in its aesthetics than in its over-the-top story. Those aesthetics, however, are outstanding.

The Hateful Eight features a score by the great composer Ennio Morricone (The Good, the Bad and the Ugly). It’s shot in 70mm, which thrillingly captures its western setting.

The film boasts an impressive ensemble, with Kurt Russell as a bounty hunter escorting a dangerous criminal (Jennifer Jason Leigh) to be executed. Traveling with a fellow bounty hunter (Samuel L. Jackson), the trio stops at a haberdashery to shelter from an oncoming blizzard.

There they meet a hangman (Tim Roth), an aging general (Bruce Dern), a cowboy (Michael Madsen), a racist sheriff (Walton Goggins), and the building’s caretaker (Demian Bichir). Trapped together, the group quickly starts to tear each other apart, resulting in a climax that is perhaps the most shockingly violent of Tarantino’s famously violent career.

Bad Times at the El Royale 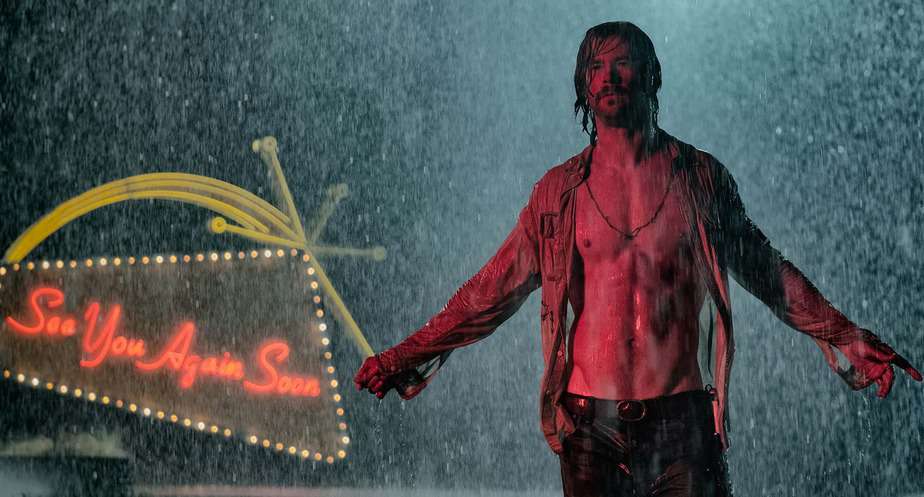 Owing as much to The Good Place and And Then There Were None as it does to early Quentin Tarantino movies, Drew Goddard’s latest film (which, it has to be said, also takes a lot from his first directorial outing, The Cabin in the Woods) is a stylish exploration of morality, trauma, and guilt.

Bad Times at the El Royale gathers a bunch of strangers (Jeff Bridges, Jon Hamm, Cynthia Erivo, Dakota Johnson, and Cailee Spaeny), along with a lone motel employee (Lewis Pullman), at a once-popular inn that sits on the border between California and Nevada.

Each of the strangers is there for different reasons, none of them the ones they give each other up front. But the trouble that one of the guests trails behind them ends up forcing these characters together to confront their true selves.

The movie’s got style to spare — an excellent soundtrack, impeccable set design — but it’s the performance of Cynthia Erivo, best known for her stage work, that shines brightest. Where some of the film’s characters can feel thinly drawn, Erivo’s aspiring singer, Darlene, brings a grounded sense of soul. In a movie full of good moments and originality, that’s high praise. 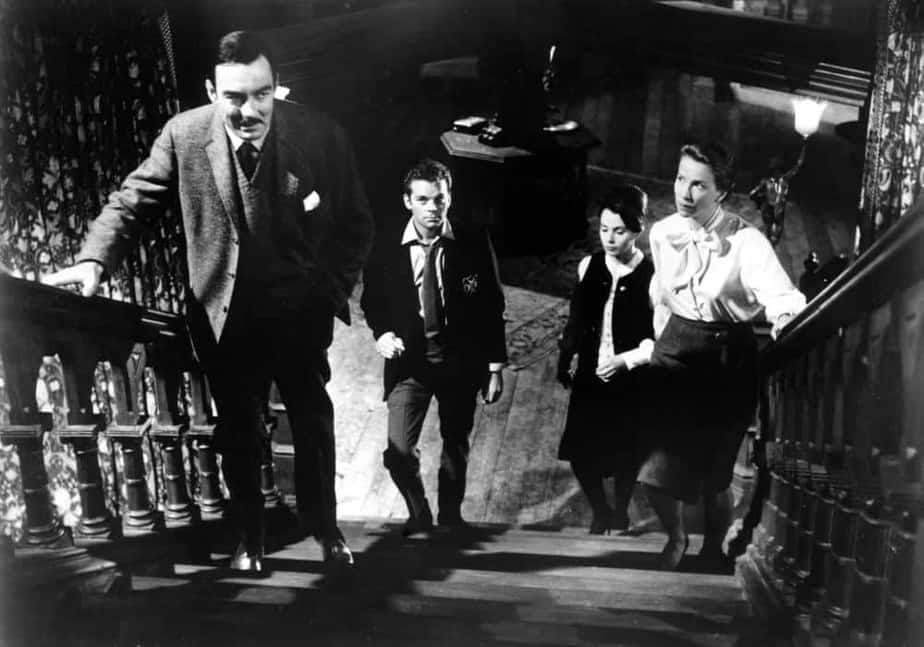 Another “dusty old house” movie that makes excellent use of sound and practical effects, Robert Wise’s The Haunting is an absolute classic of old-school horror. Based on a novel by Shirley Jackson (an iconic figure in spooky lit), the movie takes place at a house with generations of unfortunate residential history.

A scientist (Richard Johnson) hopes to study paranormal activity at the house. He brings in Eleanor (Julie Harris), a young woman who’s had past experiences with poltergeists, and Theodora (Claire Bloom), a psychic, as part of the study.

In addition to its truly impressive effects (like its famous bending door scene), The Haunting also includes some ambiguity in the plot, leaving the audience to wonder how much of what we see is real, and how much is in Eleanor’s own mind. This is a change from Jackson’s novel, but it makes the film that much more effective. 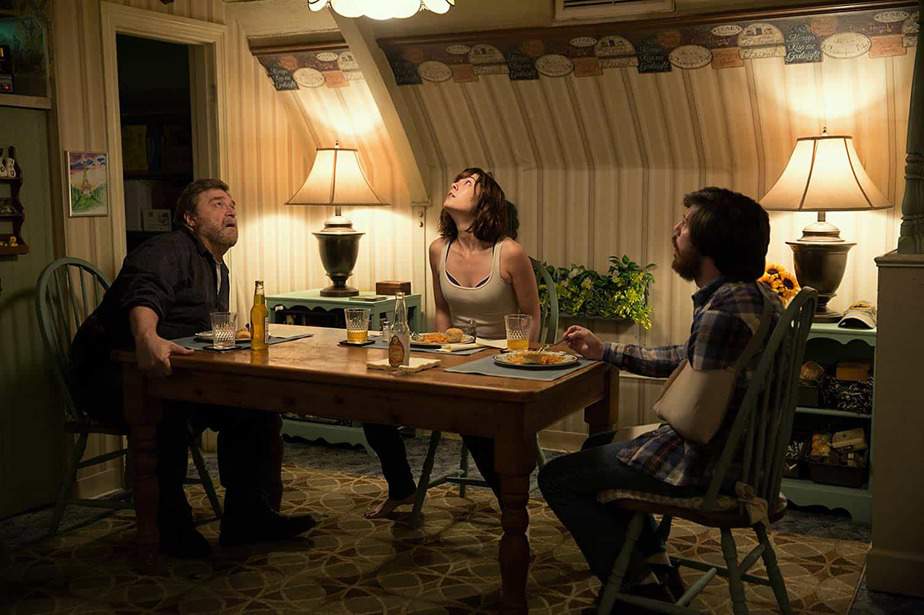 Described by producer J.J. Abrams as a “blood relative” of 2008’s Cloverfield, 10 Cloverfield Lane originated as a low-budget thriller called The Cellar. The film (which also features Bad Times at the El Royale director Drew Goddard as a producer) evolved through a series of re-writings — including one by Oscar-winner Damien Chazelle — into its final format: a tight, twisty thriller that takes advantage of its mostly-confined location.

Michelle (Mary Elizabeth Winstead) takes off from her New Orleans apartment after breaking up with her fiance. After hearing radio reports of blackouts in some major cities, she’s sideswiped by a truck and knocked out. She comes to in a cinder-block room, her injured leg braced and chained to the wall.

The man who brought her there, Howard (John Goodman) tells her she’s in his bunker, safe from an apparent apocalyptic attack outside, along with fellow survivor Emmett (John Gallagher Jr.). Has there really been an attack, or is Howard holding Michelle and Emmett captive? The audience is kept uncertain of the answer until the film’s final moments.

The 50 Best Christmas Movies of All Time